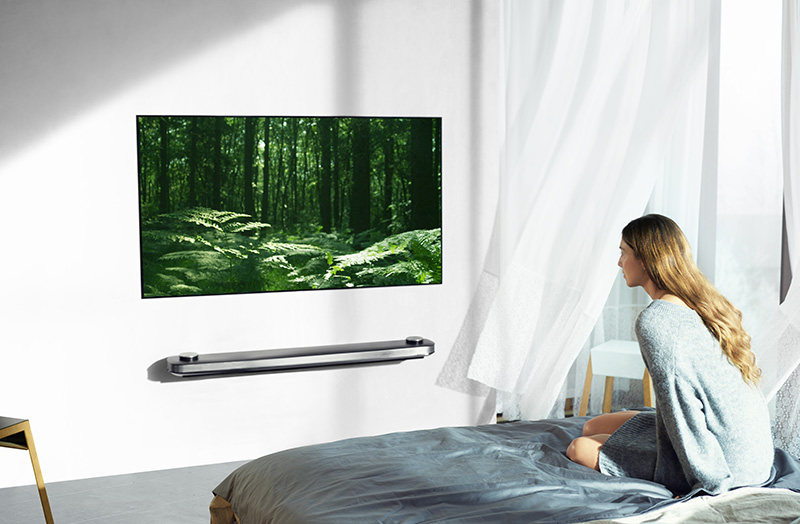 It’s 2017 and you want to buy a great TV. The good news is that LG’s already fabulous OLED TVs have received notable updates, so here is what you can expect from their latest line-up. 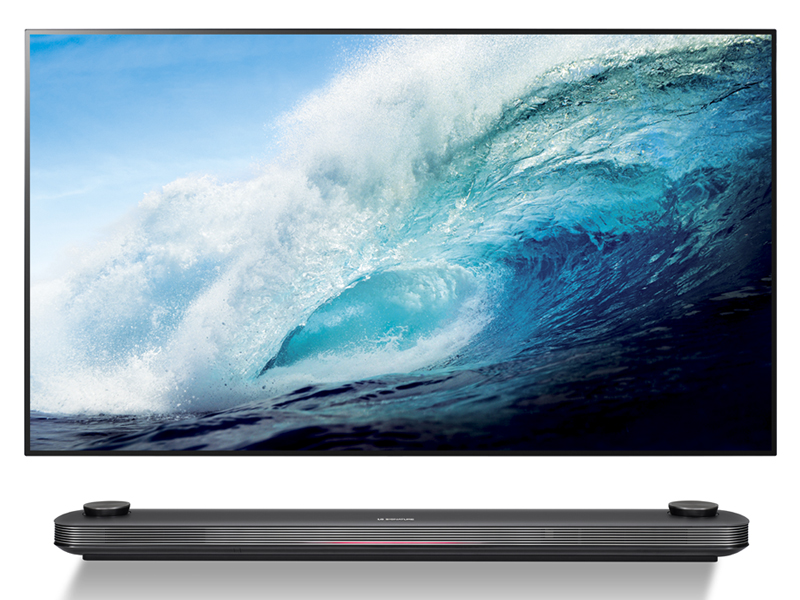 The flagship LG Signature OLED TV W is a TV that’s as thin as wallpaper and as vibrant as a clear window. With a depth of only 2.57mm, the 65-inch W is as thin as two S$1 coins stacked together.

The W blends perfectly into the wall, with a Perfect Wall Mount that’s completely gapless. The display connects to its all-in-one speaker bar unit via a slim universal strip cable that can be easily hidden. 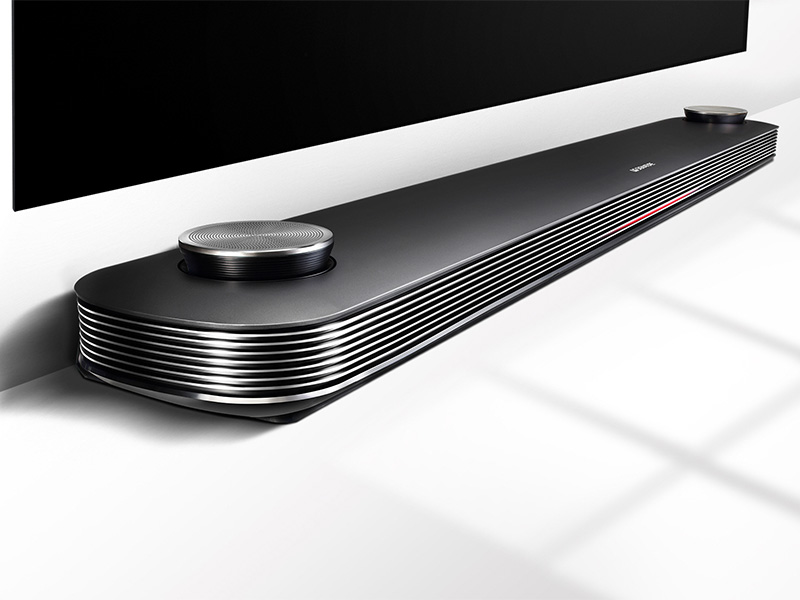 While the display offers all the stunning benefits of an OLED display, the speaker bar presents the power of Dolby Atmos surround sound. The 4.2 channel 60W speakers engulf the space with sound that comes from all around, filling your home with acoustic detail. The speaker bar also acts as an all-in-one box to house all of the W’s image processing system and input/output connections, reducing clutter in your living space.

With its minimalist beauty and clutter-free design, you can see why the LG Signature OLED TV W is the proud recipient of 45 awards from CES 2017. It comes in 77-inch and 65-inch sizes.

1. Contrast is key for amazing visuals

4K is a given resolution for a TV in 2017, but your eyes are actually more attuned to contrasts and colors than resolution, especially at the distances that most people watch TV from.

So the first key is to get a TV with great contrast. A TV with higher contrast ratios will produce images that ‘pop’ from the screen and look more life-like.

LG’s OLED TVs can produce “perfect blacks”, which means the TV can deliver the finest details in dark areas. It’s a key difference between LCD/LED and OLED TVs; LCD/LED TVs can’t turn pixels off at the individual level, which means dark areas can still look lit. This reduces contrast.

OLED TVs, however, can turn individual pixels off, which creates true black. LG OLED TVs can, in fact, produce 200 times deeper blacks than conventional LCD/LED TVs. This ability to create deeper and true blacks creates more contrast between the bright and dark areas of the image, creating more visual ‘pop’ and greater depth in the image.

Color is inherently emotional, the wider a display’s ‘color space,’ the more colors it can show you, and the deeper it can draw you into a scene.

Older HD TVs used an 8-bit system for colors, which could generate over 16.7 million colors. LG’s OLED TVs have 10-bit color systems, which can display over a billion possible colors, 64 times more than conventional LCD/LED TVs.

LG’s OLED TVs’ expanded color scope offers 99% of the Digital Cinema Initiative’s (DCI) color standard, which is the same color space that you get in movie theaters, bringing a rich world of color detail into your living room.

Sound forms as much of the cinematic experience as the visuals; imagine being able to hear every note of a sweeping soundtrack or the single drops of rain in a nature documentary.

LG’s OLED TVs ship with support for Dolby Atmos, which is a surround sound technology first developed for cinemas to create an ‘all-around’ soundstage. Conventional sound output is based on left and right stereo speakers, whereas Dolby Atmos captures up to 128 different sound objects in a single scene at one time.

You’re unlikely to have a cinema in your house, but Dolby Atmos is also available for the home theatre. All you’ll need is an LG OLED TV that can decode the soundtrack from a Dolby Atmos source, and it’ll stimulate all of your senses with full 360 surround sound.

4. Future-proof with the widest range of HDR formats

TVs last for years, so you’ll want to make sure to get specs that will last as well. LG’s OLED TVs come with HDMI 2.0a, which is the latest standard for HDMI. But we want to point you to another emerging technology; HDR.

If you’ve already seen a High Dynamic Range (HDR) display, you know it’s amazing (and if you haven’t yet, go and see it). Simply put, HDR shows you more, much more of an entire scene. You see vivid details in the bright and dark areas that weren’t there before, and it truly makes you feel like you’re looking into a window instead of a TV. 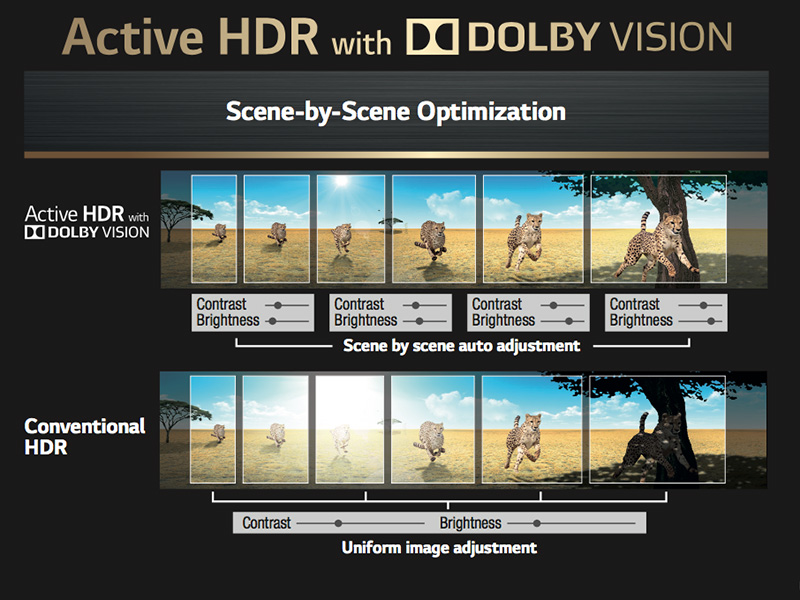 To get the most out of HDR, you’ll need HDR content. However, while HDR content is already available, the emerging landscape is rife with different standards, like HDR10, Dolby Vision, HLG, and Advanced HDR. Each performs differently; with Dolby Vision, for example, brightness and contrast are adjusted uniquely in every scene and up to 170,000 times in a standard two-hour movie, whereas HDR10 only offers uniform image adjustments throughout the entire movie.

5. Designed to be easy to use

Finally, while TVs are getting smarter, it also means that they need to be more thoughtfully designed so that everyone in the house can enjoy them.

LG’s newest OLED TVs ship with webOS 3.5, a simple and fun to use interface that lets you smoothly find your favorite content and navigate through the TV’s settings. The LG Magic Remote lets you click, point and scroll to change the channel, and a Netflix hotkey gives you one-lick access to your Netflix subscription.

All 2017 LG OLED TVs get the same flagship features

One amazing thing about LG’s 2017 OLED TV line-up is that you get all of these five features, no matter which TV you choose. So which LG OLED TV you are simply depends on which design you like and what screen size you’d prefer. 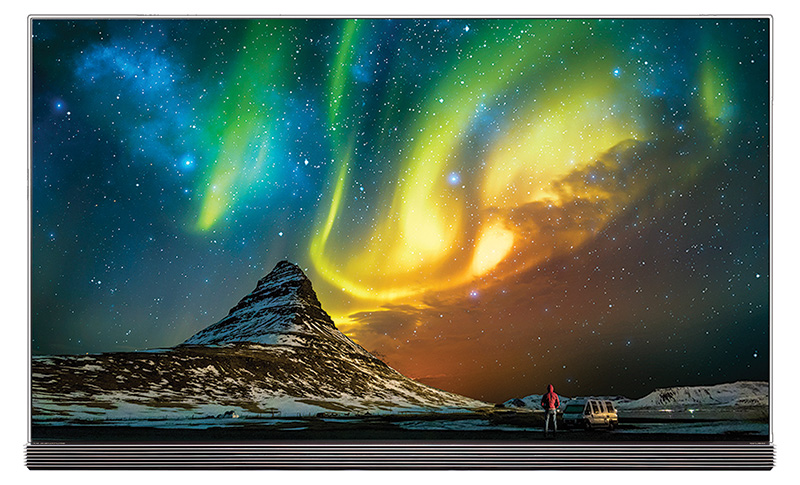 If you like a large OLED TV with a stand for your console, you can look at the Signature G7T OLED TV, which comes with a sound bar and ships in 77-inch and 65-inch sizes. The E7T, which also comes with a forward-firing sound system, and the C7T both come in smaller 65-inch and 55-inch models.

To find out more about LG OLED TVs, go to http://www.lg.com/sg/oled-tvs 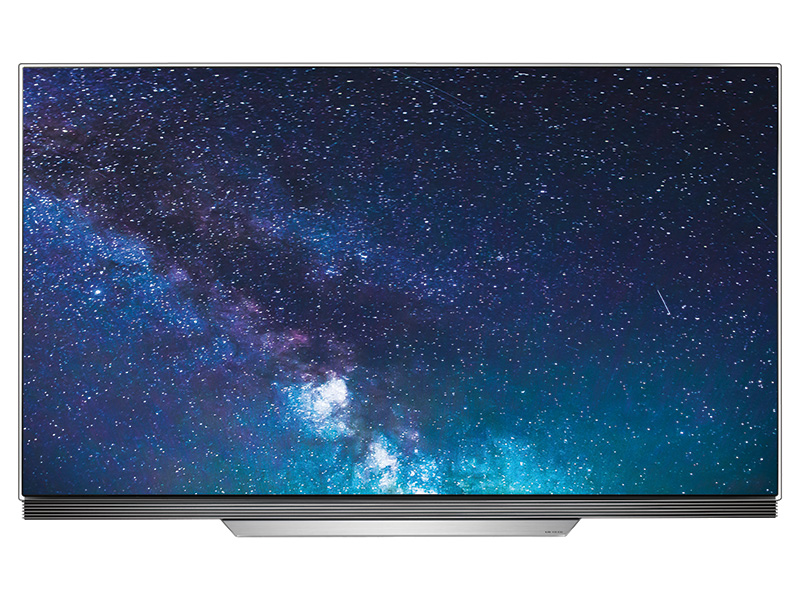 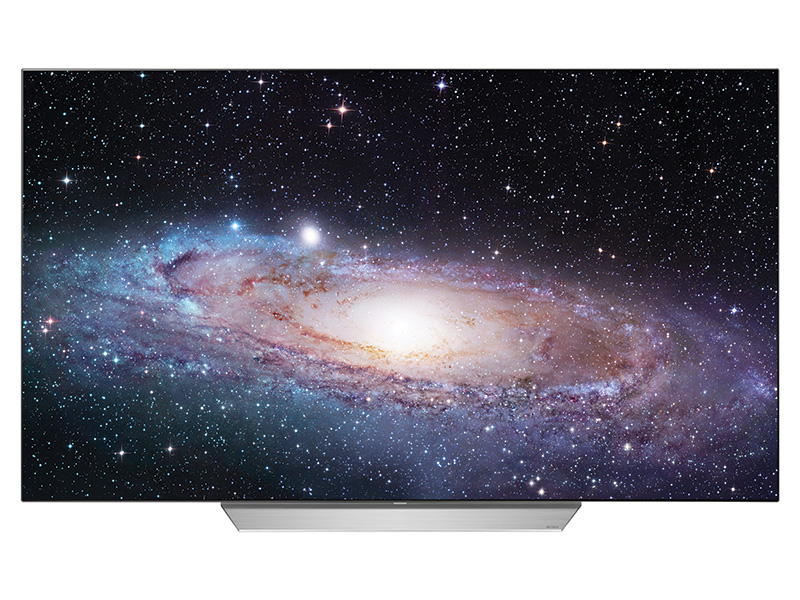