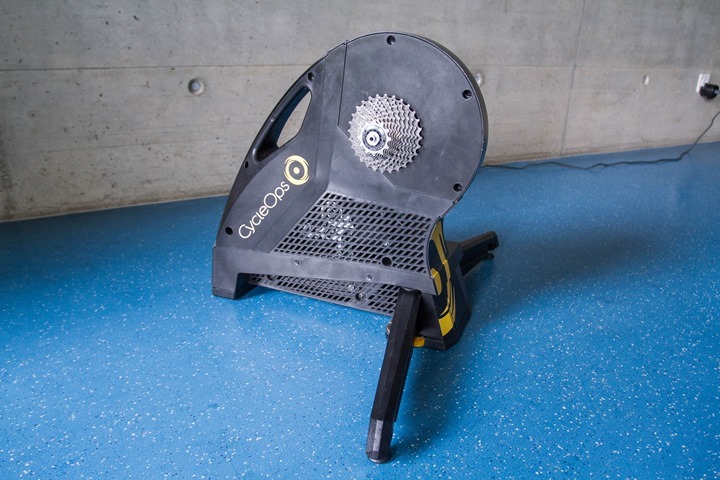 Today CycleOps has announced their latest trainer product, the Hammer.  Taking a cue from others in the industry on having a catchy name, the Hammer is CycleOps’s first totally new trainer in a few years.  And also their first direct drive electronic controlled trainer.  They’ve had both direct drive (the Silencer), and electronic controlled trainers (the PowerBeam) in the past – but never together as a single product.  Now those two realms have combined.

I’ve spent a bit of time on a prototype unit, toying with it for a few hours.  So let’s dig into how it all works. 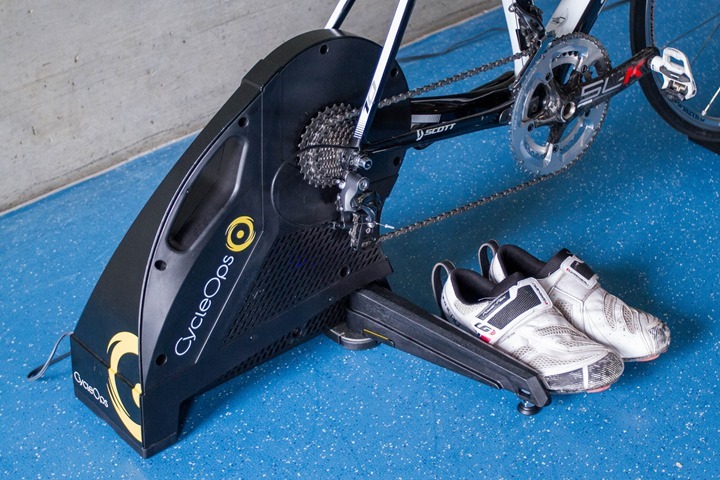 Starting with physical footprint, the Hammer has fold-in locking legs.  This allows it to easily fold up and be slid off to the side.  The actual weight (46lbs/20.8kg) of the unit is nearly identical to that of a KICKR (47lbs/21.3kg) or Tacx NEO (48lbs/21.7kg).  This is notable because it means it’ll just barely be under most standard airline weight limits for checked baggage (50 pounds). 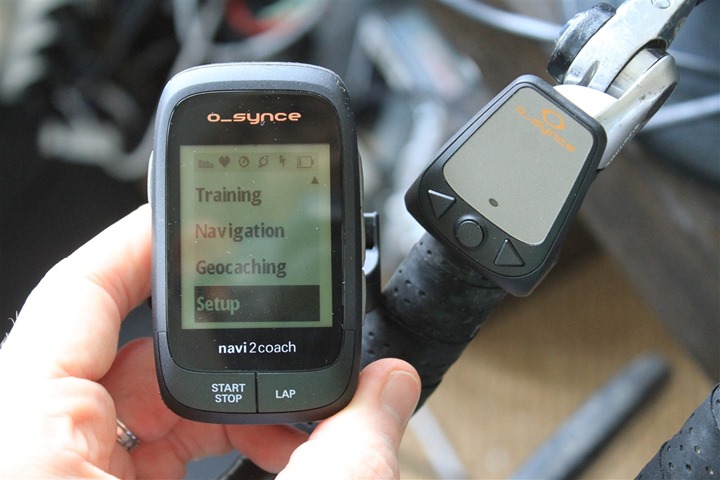 However, unlike the Tacx or Wahoo trainers, the Hammer is weight-balanced with handle designed around that.  This means that it won’t flop over and take your shins out when you try and pick it up.  Sometimes it’s the little things in life… 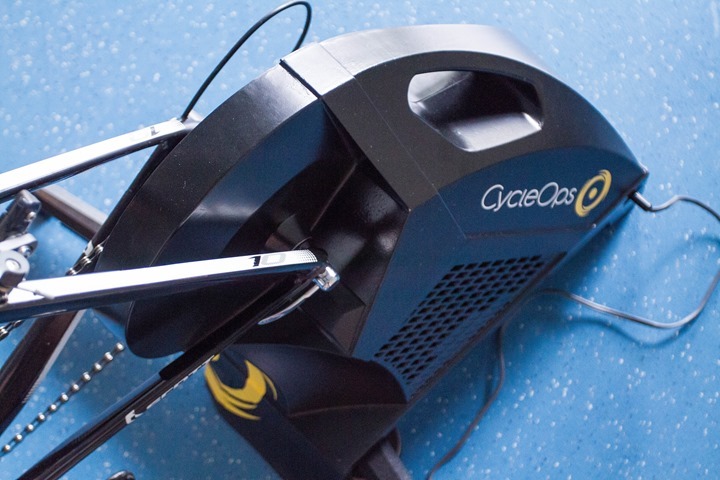 Speaking of little things, they actually include a small front wheel stabilizer, which has a home under the front of the Hammer trainer.  Once you close up the legs, it’ll hold it securely in place next to it. 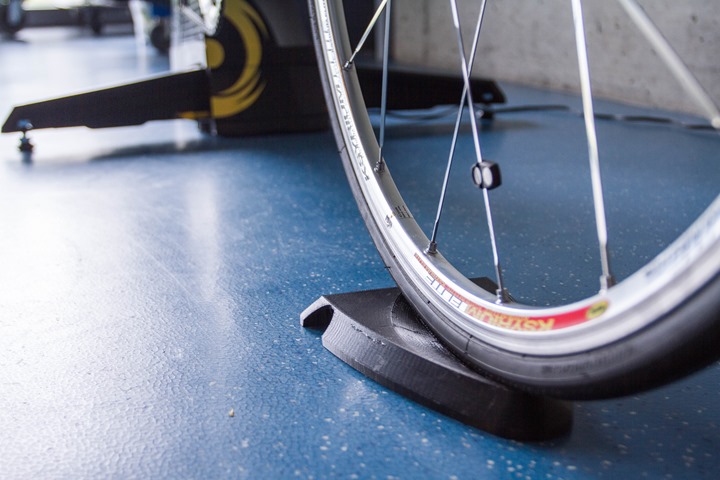 You don’t need the front wheel block to ride the trainer, it’s merely there as many folks like to have something that keeps their front wheel from wobbling around. 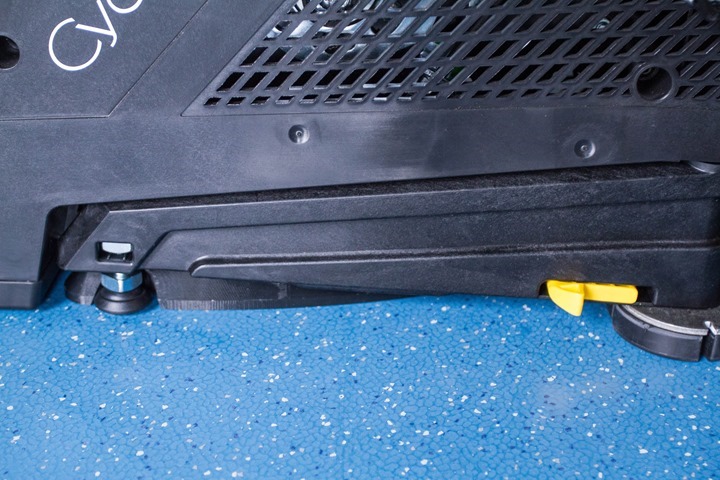 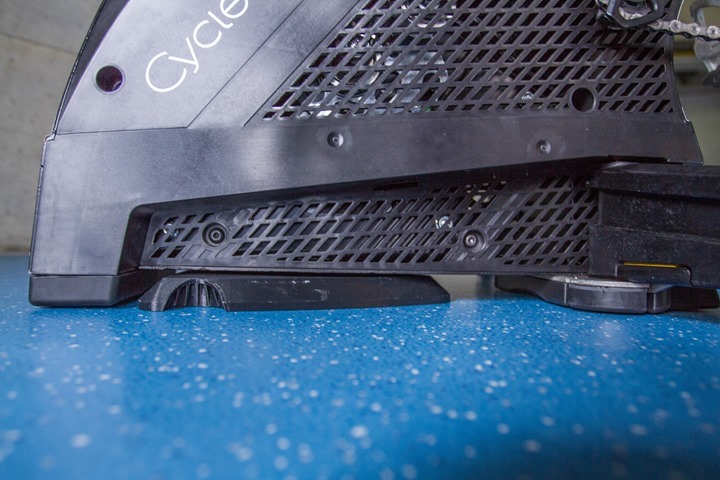 Oh, and snapped under the bottom of the wheel holder is a small disc brake lock (for those that have them), to prevent accidental squeezing of the brakes. 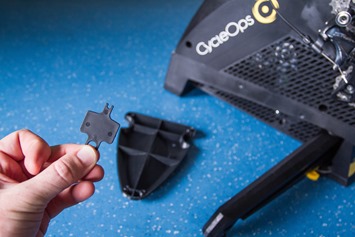 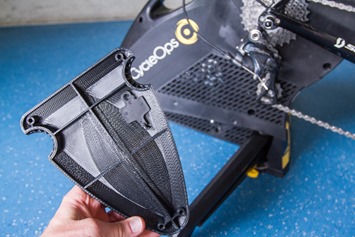 Next up is the direct drive aspect.  That’s all the rage these days in higher end trainers.  This means that you take your wheel off and throw it across the room.  Well, just the back wheel.  Keep the front one on.  The thinking behind a direct drive trainer is that by attaching your bike’s chain directly to the cassette on the trainer, you avoid wheel slippage issues.  Also, it can reduce noise (depending on design).  And it eliminates tire wear and tear. 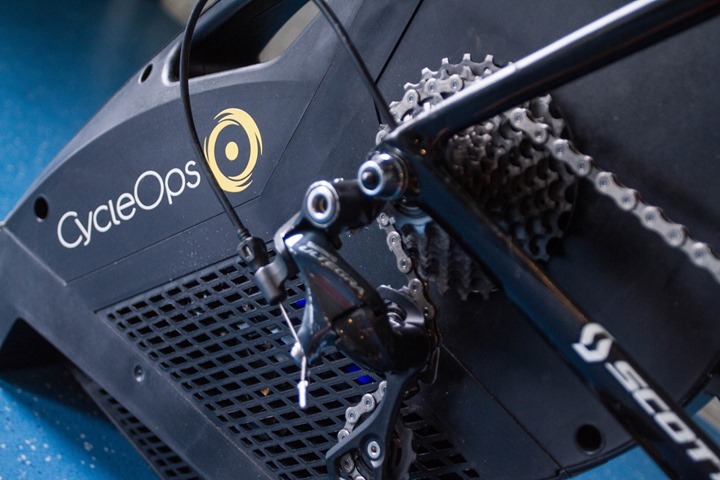 The Hammer supports Shimano 8/9/10/11 speed cassettes.  However, a cassette is not included – so you’ll have to shell out for that (the KICKR includes one, the Tacx & Elite models do not).  And, you’ll need to make sure you have the right tools to install a cassette.  They don’t at this time have support for Campagnolo cassettes, but are looking at it. 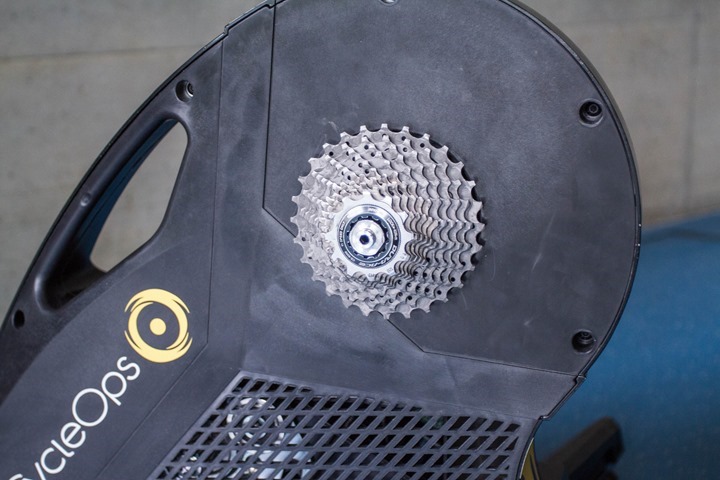 The unit has thru-axle compatibility for 130mm, 135mm, 142mm, and 148mm axles, which makes it the broadest range of axles supported today (KICKR tops out at 142mm, and NEO at 135mm).  However, CycleOps says they’ve designed the axle component pieces to be able to expand beyond these sizes down the road, should new standards surface.

Depending on the design of a given direct drive trainer, it can also be a more realistic road feel.  That’s typically accomplished through the use of a flywheel (either physical or simulated/virtual).  In general, the larger the flywheel the more realistic it’ll feel.  In the case of the Hammer, it has a 20lb/9kg flywheel, whereas the KICKR is around half that at 12.5lbs/5.7kgs.  Of course, keep in mind the Tacx NEO is a simulated flywheel, and most find the road feel in the same ballpark as the KICKR.  So take flywheel weights with a grain of salt.  It’s not the size of the flywheel that counts, but how you use it.  Or something like that. 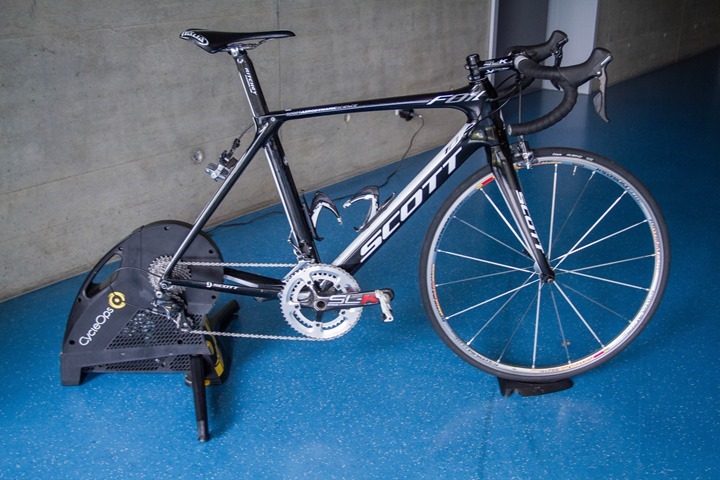 Next up is the electronics side of the house.  The Hammer is dual ANT+ & Bluetooth Smart compatible, like all new connected trainers on the market.  In this case, they’re broadcasting/utilizing the following:

At this time it won’t transmit your cadence data (like the Tacx trainers do), though, it sounds like that’s something they’re poking at for a potential firmware update.  Speaking of which, the unit can get firmware updates via Bluetooth Smart using your smartphone.

All of these electronic terms means that it’ll easily support virtually any of the 3rd party 20+ apps on the market today.  Of course, CycleOps has their own app, Virtual Training, but they were pretty emphatic during discussions that they see huge value in a vibrant 3rd party app ecosystem.  Their exact quote was:

And in that sense, they are (like Tacx).  Whereas Wahoo still hasn’t released ANT+ FE-C on their trainers, beyond beta users.

So be it Zwift, TrainerRoad, Kinomap or nearly two dozen others – all of them can support the Hammer (and most do already). 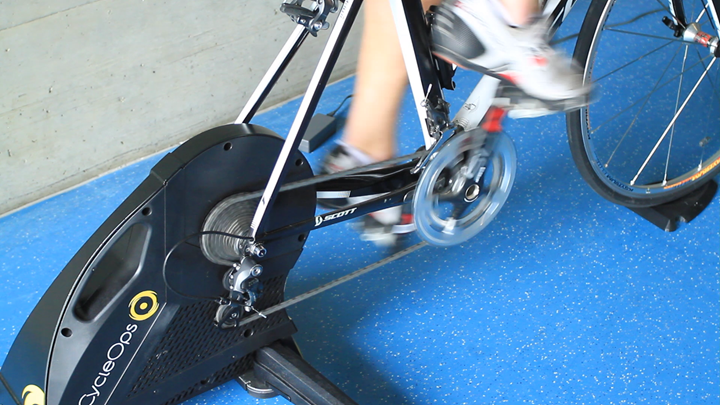 So what about noise and sound levels?  Well, the Hammer isn’t silent, but it’s also not loud.  It officially clocks in at 64db (per CycleOps measurements) at 20MPH, and per their measurements the KICKR is 72db.  Meanwhile, also per their measurements the NEO is 58db.  Those last two numbers are in the ballpark of my measurements for these devices.  Keep in mind that measuring trainers is super-tricky, because aspects like room acoustics and just how far away you measure from the trainer make a huge (massive) difference.  I give some audio demonstrations in the video below, but keep in mind they are semi-limited by the room I was in as well as the microphones I was using.  Overall though, I didn’t think it sounded too loud.

Remember that decibel levels are not linear.  Meaning just a few decibels increase is actually quite substantial.  This explains it better.  As part of my review I’ll be diving more into noise on these trainers.

Next, the unit has a temperature compensation sensor built within it, which samples once per second.  It also has a pretty interesting cool-air intake system, which is designed to keep air internal to the trainer at a relatively constant temperature (by pulling in air from outside the shell).  You can kinda see the air in-take system here: 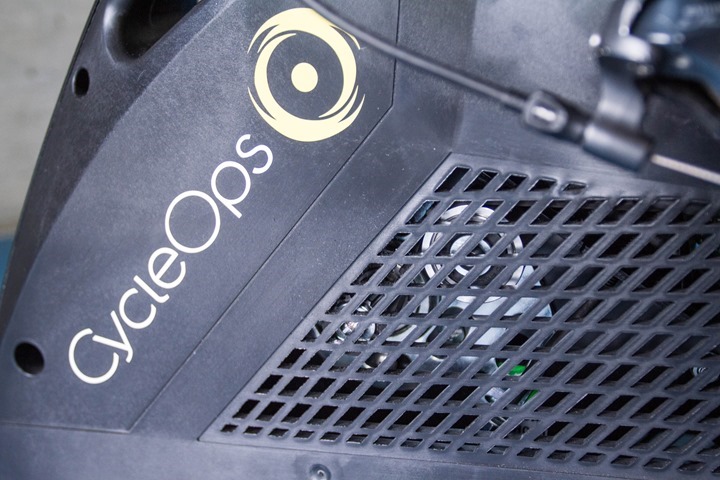 While there isn’t any form of calibration per se, they do recommend a coast-down just prior to starting to ride.  The stated accuracy of the trainer is +/- 3%. 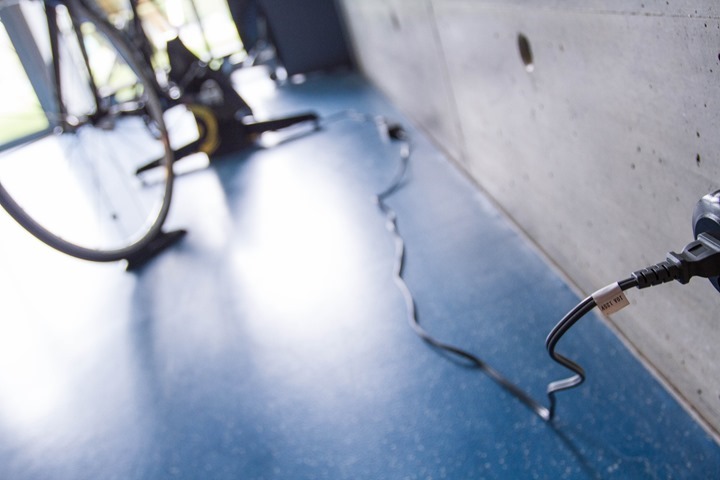 Also, the trainer does require being plugged in, which is unlike the Tacx NEO.  While it can technically be ridden without power, it’ll top-out at about 150w sustained.  Meaning it’ll basically push back briefly on a sprint up to about 400-500w, and then the flywheel catches up and it’ll slide back to a top sustained resistance of about 150w.

However, it does not need an app to control it.  So you can use it plugged in without an app controlling it.  This will allow some apps/devices to utilize a power curve that CycleOps will publish to determine power output based on the speed at the time.

Reading text not your thing?  No biggie, I’ve got videos too.  Or, one video anyway.  In the below video I show you how the trainer works, including some cool party tricks.  Plus you can hear how it sounds when you ride it in a library.  Seriously, I rode it in a library.  Anyway, click play:

Phew, ok, that was a bit longer than I expected.  Sorry!  If you’re looking for just the sound pieces, it’s about at the 5:05 marker.

I’ve added the Hammer to the trainer product comparison database.  For the purposes of the below chart, I’ve compared it against the Tacx NEO, Wahoo KICKR, and Elite RTM B+.  But you can swing over to the comparison tool and make your own comparison chart against any other trainer that I’ve reviewed and/or spent significant time on.

Note that certain metrics are a bit ‘tricky’ to define.  For example, max wattage is usually based on a given speed, and same goes for noise levels.  Tacx, CycleOps, Wahoo, and Elite have all semi-agreed to public specs at 20MPH (30KPH).  Keep in mind that for things like noise levels, it’s purely a function of speed (not power).  And with a resistance controlled trainer, if in ERG mode, you can reduce speed (even at 1,000w) to decrease noise.

Also keep in mind that pure noise decibel levels aren’t necessarily as impactful as tone.  Meaning, some trainers can have a lower noise level, but perhaps a more whiny sound (tone) to them.  Most are pretty close, but just keep that in mind. 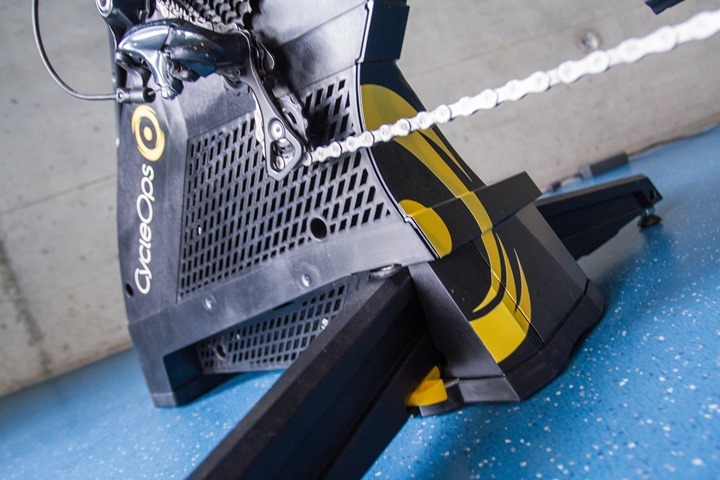 Up until last year, it was rare for trainer companies to announce trainer products outside of the Eurobike-Interbike timeframe (Late-Aug to Mid-September).  The theory was to announce at those shows, and then make them available for the northern hemisphere trainer season (winter).  But like many theories, it didn’t always work.  Trainer companies (all of them) would often be late in delivering new products following Eurobike-Interbike announcements, with deliveries creeping into December or even beyond, frustrating consumers and companies alike.

We saw hints of this changing last year.  Wahoo announced their KICKR SNAP in June, and Tacx their NEO in late July.  Both then made available in the August-September timeframe.

This year, CycleOps kicks things off with an announcement in May, for summer availability.  I fully expect the vast majority of trainer companies to follow this model this year.  It’s just so much more logical.  Announce over the next 1-2 months, and then make available by July-August.  Gives consumers time to see what kinks/quirks are in the new models, and companies to get them fixed before September.  Plus, it allows supply to catch-up to demand.  I think anyone announcing new products at Eurobike-Interbike this year will be like the guy bringing a Christmas Fruitcake to a Valentine’s Day date.

With that in mind – expect me to put together in-depth reviews of trainers as they come in.  So in the case of the Hammer, once I’ve got a final production unit I’ll get cooking on it.  This will help quite a bit in that it won’t be a massive glut of trainers in a 2-3 week period.  Oh, and keep in mind that during my test I did NOT have the chance to test/validate/inspect accuracy levels.  So that’s a huge piece that needs to be independently tested.

The good news is that virtually everyone allows you to place pre-orders now and then decide/cancel later on once products start shipping.

Update: The Hammer is now available for pre-order.  You can do so at Clever Training, which helps support the site.  Plus, if you use Clever training you can save 10% when using DCR Reader Coupon Code DCR10BTF.  Oh, and you get free US shipping.  Enjoy!