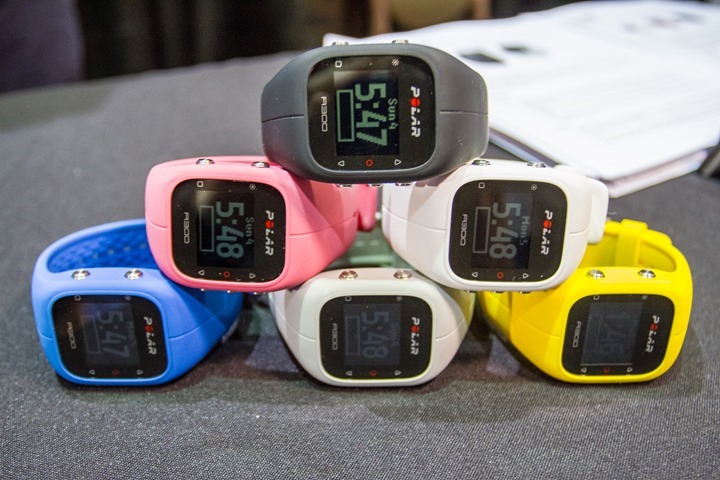 This weekend ahead of CES here in Las Vegas, Polar has announced their latest activity tracking watch, the A300.  This watch aims to take the M400 GPS watch, remove the GPS part, and then call it the A300.  Roughly.

But while that might be roughly the case when you look at the PR material, in actuality there’s a number of smaller tweaks (and adds) that differentiate it more than you might think from the M400.  For example, the A300 has removable watch bands, so you can go all colorful and swap to any of the different band colors shown above quickly: 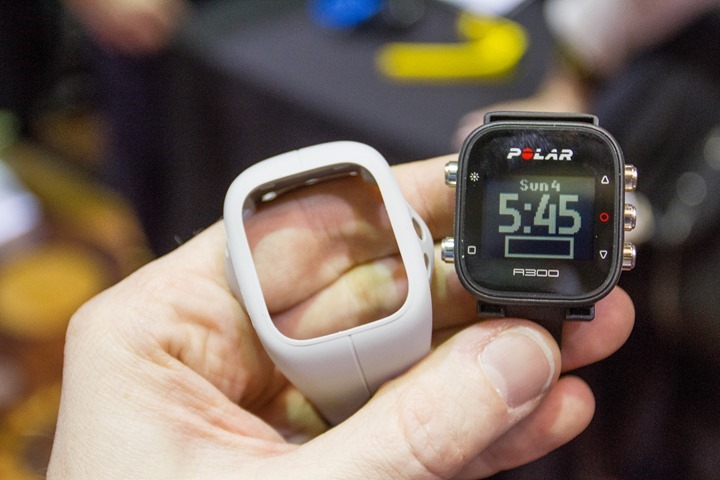 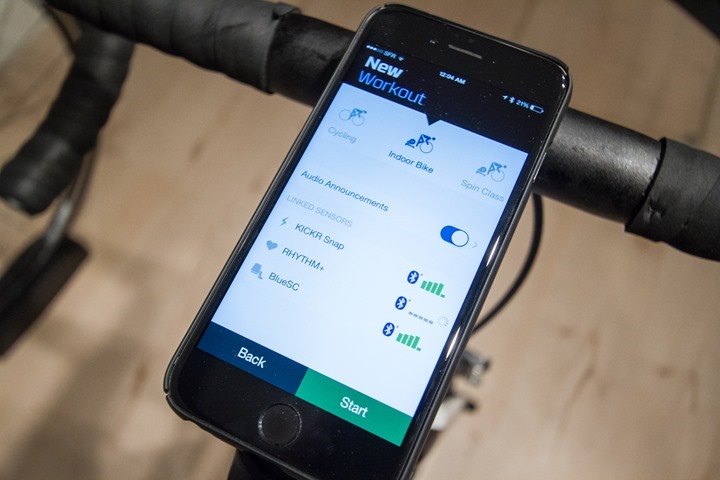 It also contains a USB plug built straight into the device that goes right into your computer with no cables (but still has Bluetooth Smart for transfers wirelessly to phones too): 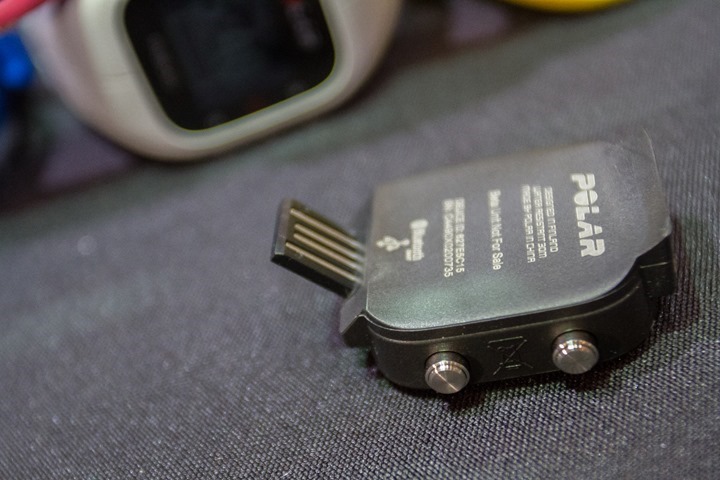 While the V800 and M400 share the same display screen, the A300 gets a reduced resolution screen with a slightly simplified menu.  It actually works well in this form factor (kinda like the Garmin FR15), and does have a cool backlight feature where the data pages will automatically light-up at a reduced level anytime you tap a button, and then you can press the dedicated light button to fully turn on the backlight at a brighter level: 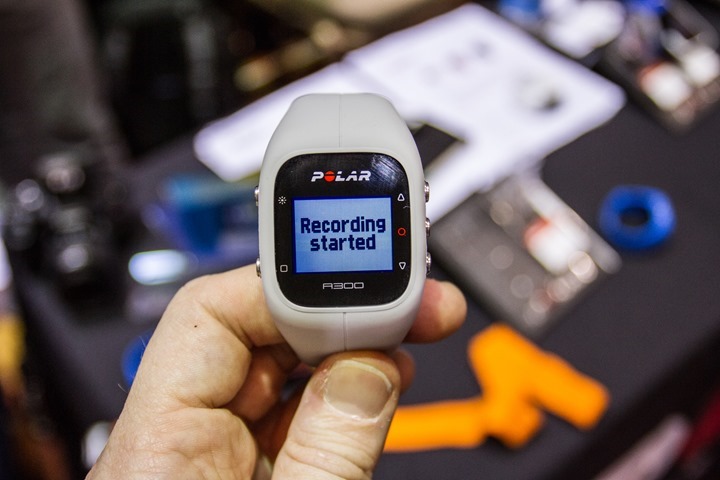 Also unlike the M400, it supports the analog portion of the heart rate strap (in addition to Bluetooth Smart), so with straps such as the Polar H7 it’ll actually record and display heart rate while swimming underwater: 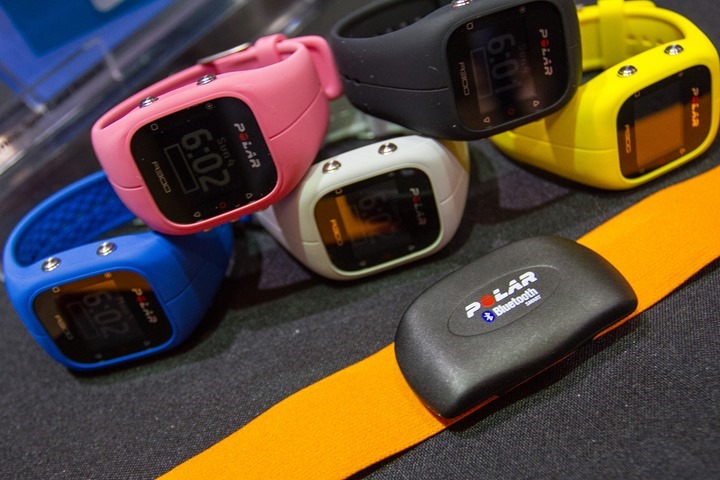 With all these features, the A300 effectively becomes a much more advanced Polar Loop activity tracking device – but in a watch form factor.  Thus from an activity tracking standpoint it does daily activity tracking including steps and distance, as well as sleep tracking.  It’ll also beep and buzz at you too – as it does include a vibration function – a feature lacking on the M400 GPS watch. 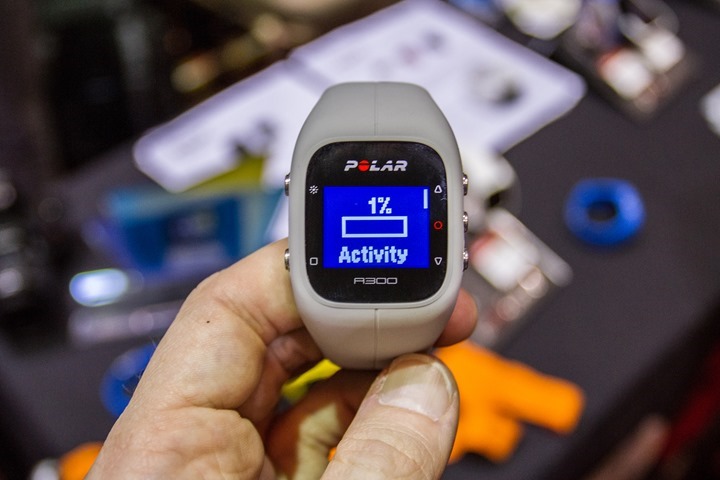 On the workout side of things, the unit is heavily focused on heart rate based workouts.  As noted above it connects to Bluetooth Smart capable heart rate straps, like Polar’s H7 and H6 straps, to display your heart rate within activities.  This data is then used to give you detailed calorie burn information with the same fidelity as some of Polar’s higher end devices like the V800.  This is notable if only because some other competitive companies put in ‘cheaper’ calorie burn algorithms in their lower end devices. 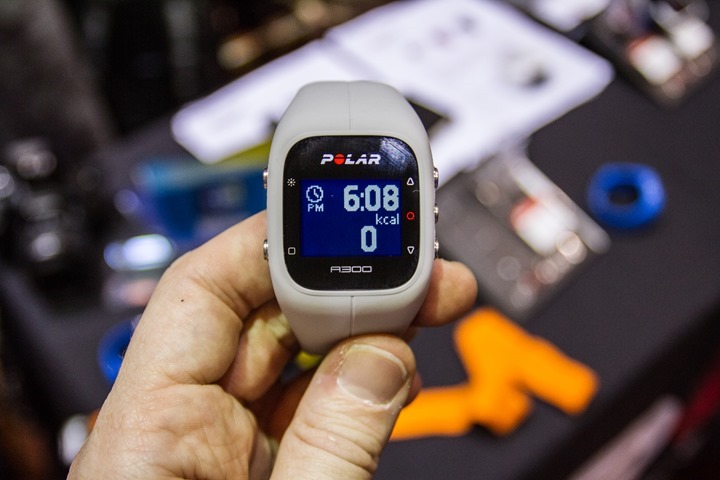 The A300 does allow you to create numerous different activity profiles on the device, like its M400 and V800 siblings.  This helps to slightly refine the calorie burn assumptions for rowing versus running, for example.  Of course, lacking a GPS chip or any other workout distance tracking, some of this starts to become more academic than practical.

These modes can be leveraged in conjunction with Polar’s existing Smart Coaching functions – which allow you to build out heart rate based workouts of structure on the Polar Flow website and then download them to the watch.  This functionality also covers guidance around targeted workouts in terms of focusing on a given effort level for a specific workout and understanding the purpose of that workout. 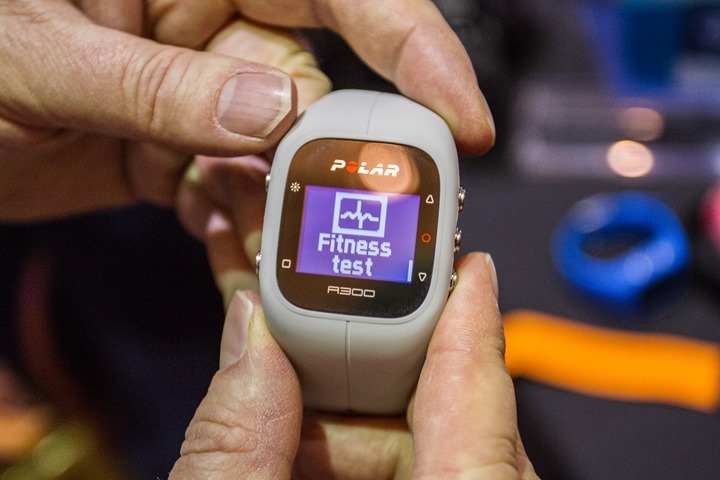 Next up is that the A300 can communicate directly with your iOS or Android smartphone to relay the data to the Polar Flow website and Polar Flow mobile apps.  The mobile apps will show your daily activity tracking details, as well as individual workout details.  Additionally, from the Polar Flow site you can export out your activity data for manual transfer to 3rd party sites like MyFitnessPal. 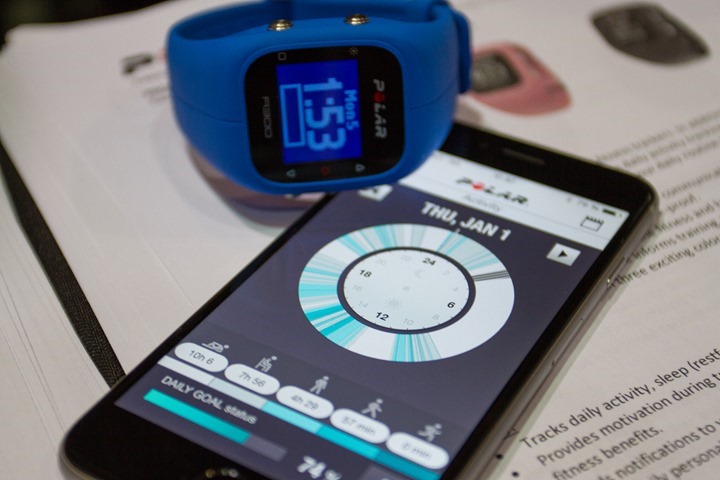 (Note that in order to use smartphone sync, your phone must support Bluetooth 4.0, which is roughly any Android phone on Android OS 4.3 or higher, or iPhone 4s and higher.)

In conjunction with the A300 announcement, Polar is also announcing that later this month (January 2015) they’ll rollout automatic sync with MyFitnessPal (MFP), which is by far the most popular calorie focused and health tracking app out there.  This will then send from Polar to MFP your step data, as well as your activity/workout data.  This will happen automatically behind the scenes from Polar Flow to MFP.

You’ll only need to sync your Polar M400, V800 or A300 to Polar Flow as normal via your mobile phone or computer with the USB port downloading.

Now while MyFitnessPal might not be as appealing to endurance athletes, Polar says it’s the first service they’re working to support with the background sync service they rolled out this fall.  They are working with a number of the other ‘majors’ in the endurance segment, but declined to announce the names quite yet.

I’ve gone ahead and added in the Polar A300 into the product comparison database.  This helps you to see how it compares to the M400 GPS watch, as well as Polar’s higher end V800 multisport GPS watch.  Note that you can always mix and match products from anything I’ve reviewed by going to the database itself.

Remember again that you can always mix and match any products within the product comparison tool. 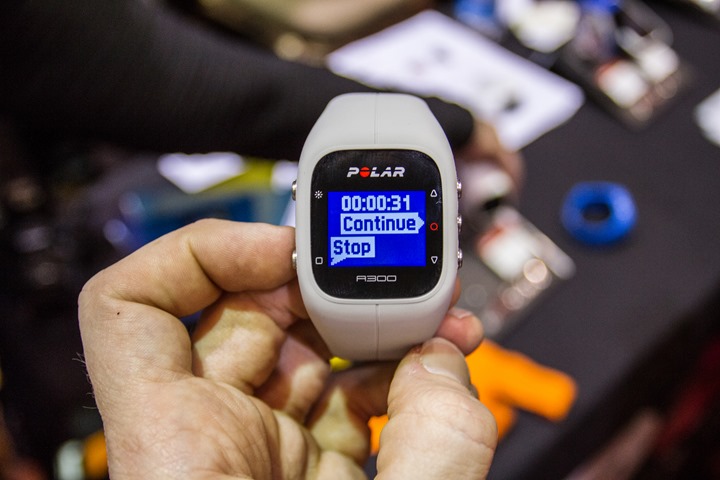 With that bit of background, let’s get to the important piece – price.  And this is where things get a bit shaky.  The A300 is priced at $139 without the HR strap.  Which…is a sorta awkward price competitively speaking.  Why’s that?  Well, the GPS-capable M400 is only $40 more.  And as I’ve said before, the M400 is the best mid-range GPS watch these days under $300.  Whereas with the GPS-less A300, you’ve got kinda an odd duck feature-wise on the price spectrum.

The A300 does however have a handful of features that the M400 doesn’t, like vibration alerts, changeable bands, and the ability to use it to record heart rate while swimming.  But those features are somewhat in conflict with the people who would realistically want them (and pay for them) at the M400 price point instead.

I suspect Polar is trying to carve out a modern replacement for their FT series that’s long been in their watch stable – and to that end, this actually makes a great replacement for that aging line.  But at the same time – I feel like it’s about $20-$30 too expensive for that market.  Had this been been priced at $109-$119US without the HR strap – then it becomes more appealing (and competitive).  But because a HR strap is pretty much 100% required to have this unit be of any value, you’re looking at an entry point today closing in at $180…which is again quite a bit compared to other options on the market (or phone apps).

As for an in-depth review, Polar’s handing off to me a unit Monday, so I’ll likely aim for some form of review later in the month or early February, depending on the load of devices coming out of CES this week (and into my suitcase).

Thanks for reading – and feel free to drop any questions below!

Welcome to CES 2015! Don’t forget to check out all my CES 2015 coverage, as well as my continual updates throughout the day on Twitter.  It’s gonna be a crazy busy week!