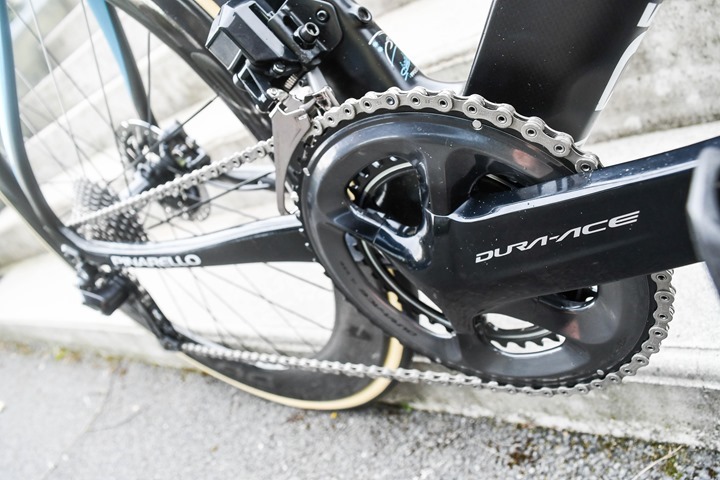 Today, every power meter company in the industry just breathed a huge collective sigh of relief: Shimano did not ultimately decide to baseline their long rumored integrated power meter as part of the Dura-Ace standard offering.  Instead, they made it optional at an (unknown) higher price point.

But that doesn’t mean these companies can rest on their laurels – far from it.

However, let’s not get too far ahead of ourselves on today’s announcements.  After all, there’s plenty of interesting news within today’s Shimano announcements.  These announcements centered on the new Dura-Ace R9100 platform.  It’s been three years since the last Dura-Ace product range, the R9000 (and 7 years since Di2’s introduction in the 7900 platform).  Shimano noted the stability of these release cycle timeframes.

The R9100 platform is vast – it covers everything from shifting to brake systems, drivetrains to wheels, and pedals to power meters.  I’m going to largely focus on pieces that are electronic (gadgety) in nature, but will include notables on other components as it makes sense. 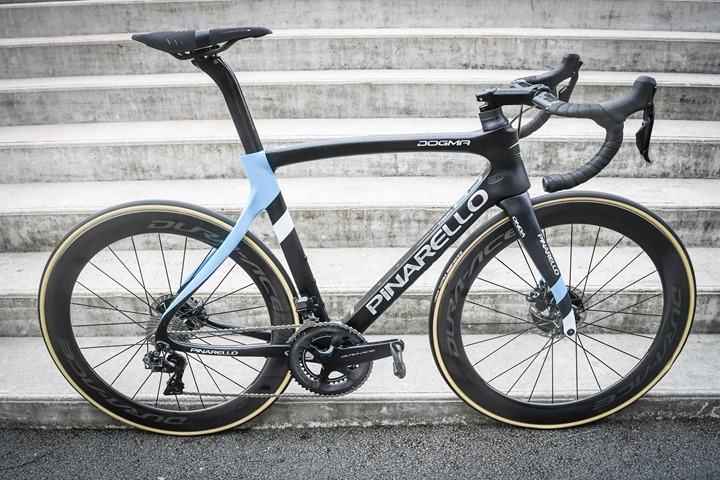 The entire new platform is known as the Dura-Ace R9100 – which covers all of the aforementioned categories.  Within that there are numerous different new hardware (and software) components, which is best summarized as:

Remember that Shimano basically categorizes their group sets into three chunks: Dura-Ace (highest), Ultegra (mid-range), and 105 (low-end).  All of today’s announcements purely focus on the Dura-Ace range. There were no announcements related to the other two product ranges.

Now at the base level, there are really two specific naming conventions here to be mindful of: The R9100 and the R9100-P.  The difference?  The R9100-P has a power meter integrated, with the ‘P’ standing for power meter (not Pokémon or Pickles).

Because my blog is largely focused on the gadget side of the house, I’m going to mostly ignore the new wheels/brakes/shifters, and instead focus on the power meter and Di2 side of things. 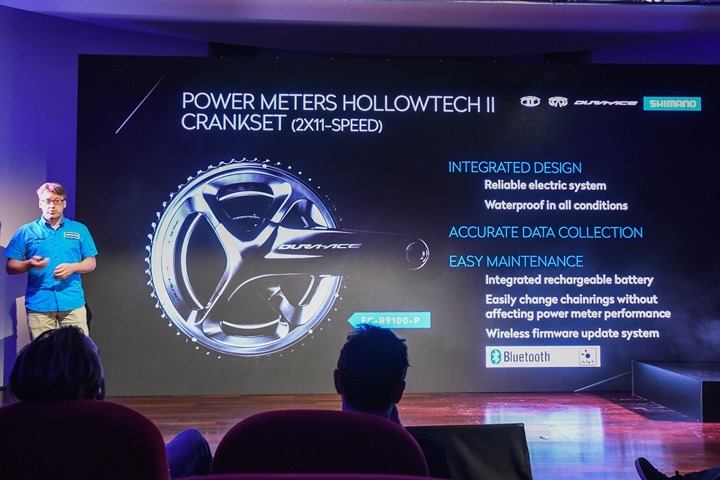 So how is the FC-R9100-P different?  Well, in many ways it’s not much different from what’s on the market.  The only true difference is that Shimano’s making an integrated purchasing option.  Which is basically what SRAM does with their Quarq lineup, except that Shimano merely makes it a single letter difference when purchasing R9100 vs R9100-P.

However, while the end results are quite similar – the paths the companies take in technology to get there are quite different.  Let’s start with the baseline specs:

The rechargeable battery choice will be rather interesting.  While there are upcoming entrants into the market with a rechargeable option (i.e. WatTeam), all other companies are using some variant of coin cell batteries.  Even SRM toyed with the idea of a rechargeable unit for the past few years (going as far as formally announcing it), but ultimately decided to defer the project and re-focus efforts elsewhere.  In Shimano’s case, the battery is wired between the left and right side, using a battery pod located within the spindle.  That same wiring also provides communication between the two sides of the unit.

The side of the power meter includes a small status LED for validating enablement, battery and calibration status, as well as a button that can be used to both turn on the system as well as calibrate it.  Just like Di2 the battery states are indicated by the colors of the LED (i.e. solid green is greater than 50%).

Shimano recommends calibrating the unit prior to every ride, to account for environmental changes (pressure/temperature).  To do so you’ve got two options: You can either hold the button on the side of the unit until it flashes blue, which will trigger calibration when in a neutral position.  Alternatively, after powering on if you’ve got a head unit capable of sending a calibration command (that’s basically all of them), you can do that as well.

The R9100-P will be available in the following crank-arm lengths:

When asked whether they developed their own power meter tech, or licensed it from another player in the industry they confirmed it’s their own technology.  They noted it’s the same technology used in their bike fitting platform.  They would not disclose how many strain gauges are used in the R9100-P, nor the arrangement of those gauges.

Next you’ll remember that the unit does include Bluetooth Smart capabilities, but only for firmware updates.  The company says that they are considering adding in Bluetooth Smart power broadcasting down the road – but there’s no firm plans for doing that.  If they did so, they noted it would be via firmware update, as the hardware does support it.

There are pieces that haven’t been released yet, notably being: Price

Also, somewhat oddly, they didn’t have any R9100-P’s on site at the launch event.  Nuttin.  Just a photo showing the tiny pod inset into the crank spider area:

Note however that at this time Shimano doesn’t have any R9100-P units per se.  Instead, they’ve been doing all testing on older 9000 series crank-arms with pods attached to them.  All R9100-P’s that you see are merely plastic mock-ups without functional components inside them. 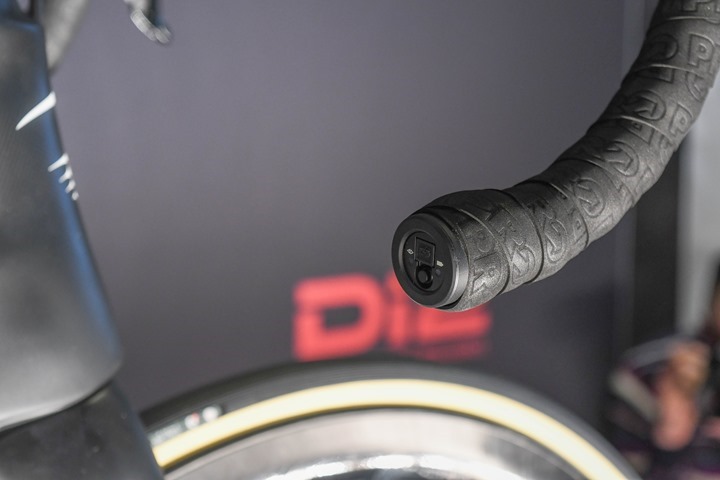 There’s a bunch of pretty cool things coming down the (e-)tube on the Di2 side.  This includes both software and hardware.

On the hardware side, shifters have been refreshed across the board, with improvements for both ergonomics, but also a focus on how to pull in hydraulic brake components going forward.  In addition, TT & triathlon folk get improved shifters designed as a single button to install upon the tip of the aerobars (ST-R9160/9180), which are compatible with the new Synchro Shift system.  Finally, there’s the new SW-R9150 programmable satellite shifter.

Then there’s some new battery and battery mounts, plus new junction ports.  But in particular, there’s two tiny new Di2 pieces that are actually pretty cool: The EW-RS910 and the EW-WU111.

The first, the EW-RS910 (seen above in photo) allows you to move the junction port into the handlebar end, basically fully concealing that better. 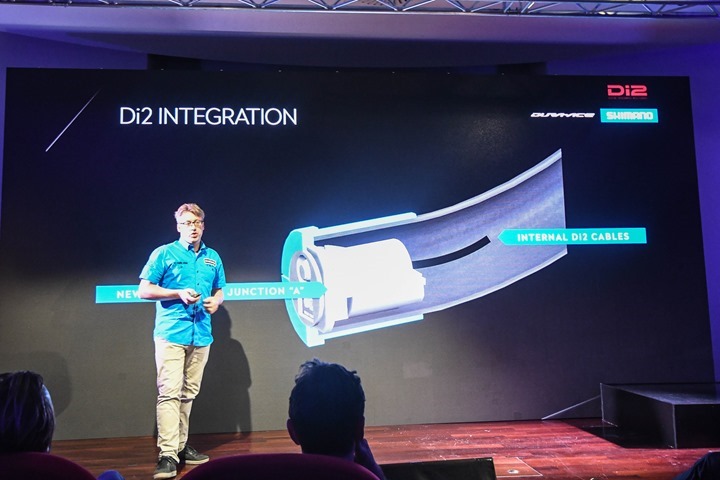 You will need a way to get that wire out of the handlebar though, so that will take either new bars or a drill to create a hole for the E-Tube cable to run: 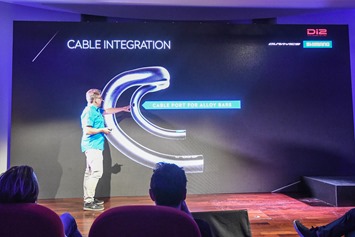 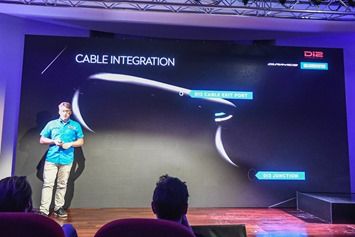 Meanwhile, the EW-WU111 is the Shimano private-ANT broadcasting connector for transmitting gearing and battery status information (to various head units like Garmin, Wahoo, and others).  This replaces the previous SM-EWW01.  However, with the new EW-WU111 you get one really important addition: Bluetooth Smart connectivity.

Now you’ll be able to configure your Di2 system using a tablet or smartphone.  Previously that required a desktop computer and additional hardware to connect your computer to the system.  Now it’s all wireless.  This will enable both firmware updates as well as configuration.

Even cooler though is just how darn small this thing is – it simply fits inline on new or existing systems: 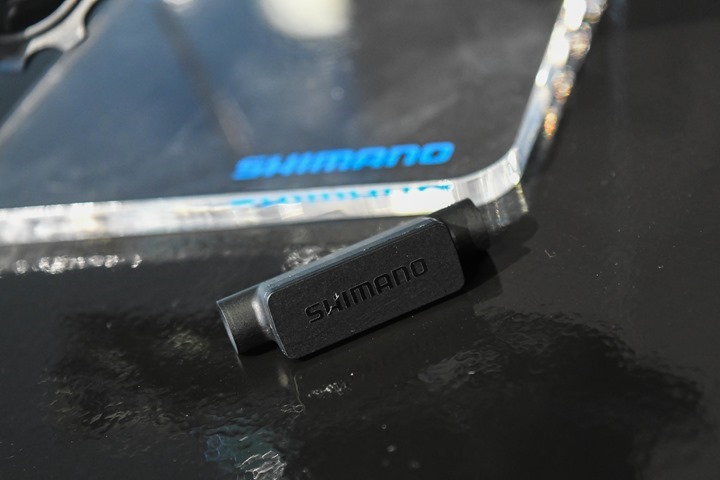 However, with existing Di2 systems you’ll need to upgrade your battery, as the new EW-WU111 pulls from that battery instead. Still, I definitely look forward to upgrading mine. 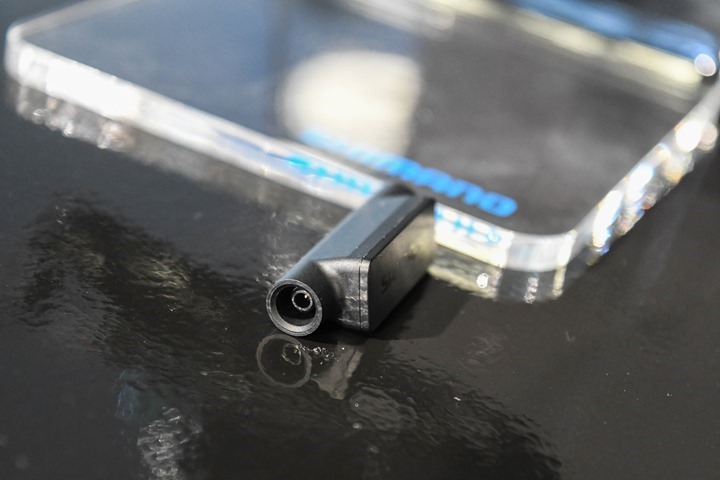 This connectivity starts to lead into changes the company is making by rolling out their previous mountain bike synchronized shifting onto the road platform.  This enabled you to shift up/down the range of gears and ignore whether it was a front or back shift.  Instead, you just shifted to make it easier or harder, and it logically changed whichever derailleur (front or back) was most applicable to make that happen.  With the triathlon/TT setup, you can now use a single button per shifter configuration too.

The Synchronized Shifting system has two modes (which can be programmed):

– Full Sync Shifting: In this case it’ll automatically shift to the easier/harder gear, regardless of whether that’s front or rear derailleur doing the work
– Semi-Sync Shifting: In this case if you shift the front derailleur up/down, it’ll shift correspondingly the rear derailleur by 1-2 gears, which minimizes the impact of the front rings shifting.  Effectively making it less painful of a jump.

All of this is again customizable with the new EW-WU111 using Bluetooth Smart connected apps.  These apps fall into two camps:

Both of these will be available for iOS/Android platforms. 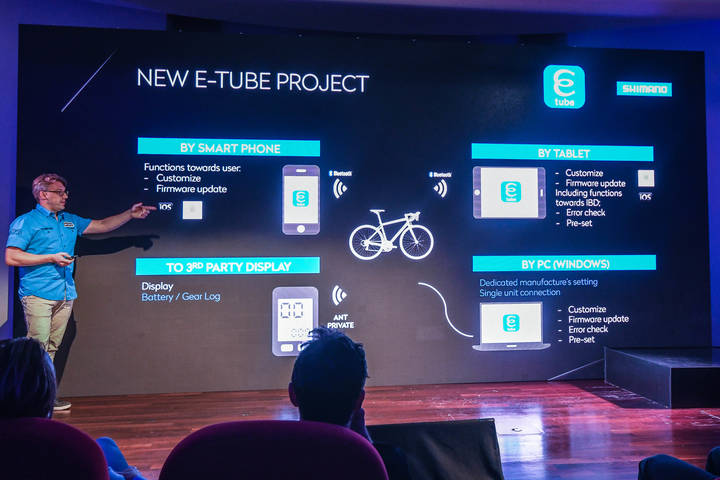 Of course, as connected technology creeps further and further into the bike world, it means that consumers, bike shops and pro teams alike need to keep up with how to configure these systems.  A point that Team Lotto NL-Jumbo’s Matheiu Heijboer spoke about regarding their team mechanics, saying “It will be more demanding, but that’s the sport, that’s how it evolves.  Everything becomes more demanding.”

Availability gets a bit tricky when it comes to which parts are available when.  Roughly speaking there will be a broadly phased launch, which is best categorized as:

As for pricing, that’s also extremely messy as it depends on the exact components that you’re looking at.  Plus which currency.  And some components haven’t had prices released yet either (like the power meter variant or the standalone wireless transmitter). 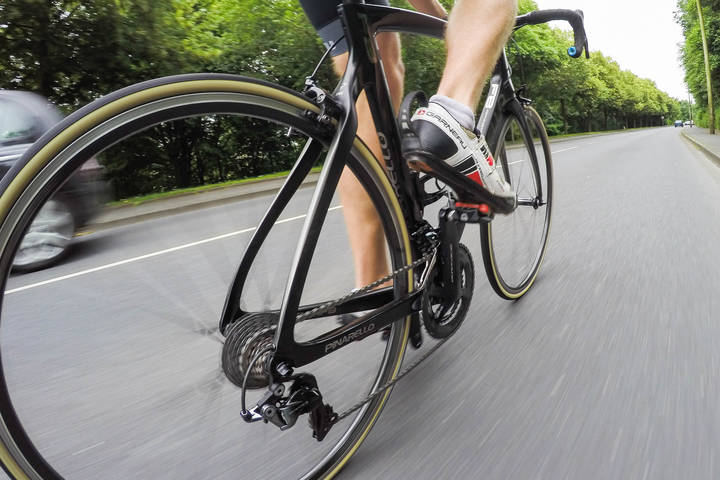 All in all, it’s a reasonably solid – albeit not unexpected – launch.  Almost everything disclosed today has been rumored for some time.  However, details around whether or not the power meter would be considered baseline – as well as upgrades to Di2 were unknowns.

The real question remains the power meter pricing.  The way pricing with Shimano works means that it might take a bit of time for that to filter out, on a per country basis.  Still, one must understand that right now other power meter manufacturer dual left/right systems based on Shimano crank arms are going from $749USD (4iiii Dual, confirmed today to start shipping in July). And that unit supports dual ANT+/Bluetooth Smart broadcasting (unlike the Shimano power meter). Plus there’s other options that are more portable for a few hundred dollars more, and all of those options have been validated as accurate and are available now (versus unknown accuracy and next spring).  Not to mention all the impending companies at lower price points (that like Shimano, have yet to be validated).

Thus I’d put the over/under in the sand at about $750 for Shimano’s price difference between power and non-power versions.  Obviously, there’s the convenience factor of having it built-in, but realistically that’s overrated since for most people a bike shop is installing everything anyway. Nonetheless – once Shimano gets to the point of allowing 3rd parties to test accuracy of the unit, then I’ll certainly be there to give you the data.  As no bikes were equipped with the power meter today, my rental car full of power meter testing devices went unused today.  My cycling shoes did not though.

To me the cooler news is the better connectivity for configuring Di2 via Bluetooth Smart.  Again though, keep in mind this doesn’t mean the whole system is wireless when out on the road – it still very much relies on wires for operation while riding.  It’s just configuration that’s wireless.  But, I do very much appreciate it’ll be backwards compatible – that’s great.  Plus, the extended options for the junction box and different shifter options are also solid.

With that – thanks for reading – and feel free to drop any questions below.