BKOOL is here at Eurobike this week and has pushed out a number of updates (both software and hardware), one of which will definitely make (most) existing owners quite happy.  As a brief refresher Bkool has historically been one of the least expensive options on the market for resistance controlled trainers, which has over the years made them a fairly popular option for those wanting to get into the automated trainer game – especially in Europe. 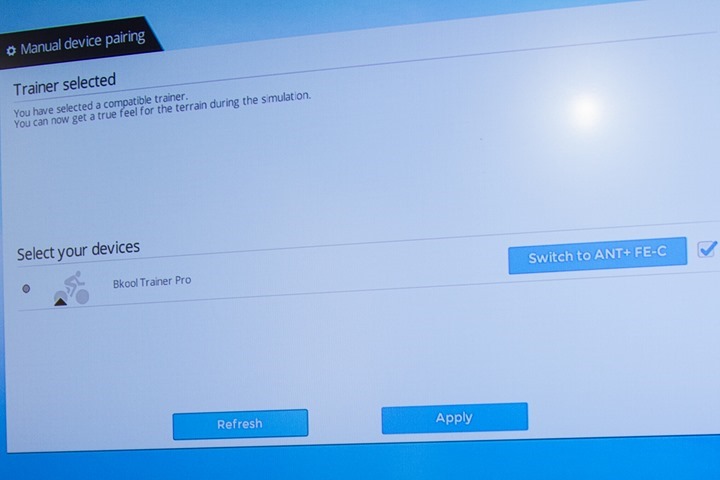 First up on the docket is the announcement of ANT+ FE-C trainer control coming to the existing Bkool lineup.  Specifically, to Bkool trainers manufactured after August 2014 (Pro or Classic).  The ‘Pro’ series trainers (black) are the ones they launched last summer, versus the ‘classic’ ones are the white trainers.  Those units as of this past Monday can actually already be updated to include FE-C support.  You’ll do that first by updating your Bkool software, and then by going into the Pairing function and finding your trainer.  You’ll then see an option to enable FE-C control.

Update Sept 8th, 2015: Bkool has changed their stance and will now support all trainers they’ve ever made with the upcoming FE-C support.  See further details in comment here. 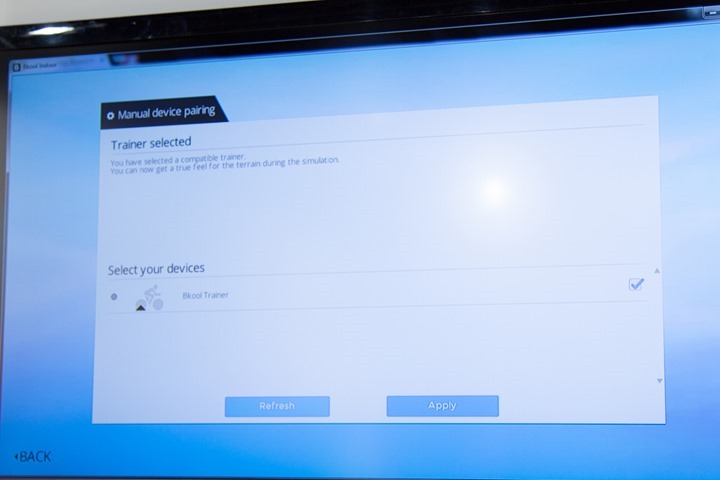 Once FE-C support is enabled, you can use apps including Zwift, TrainerRoad, Kinomap, PerfPro, and others.  At that juncture, no subscription is required for fully paid-off trainers (there’s a model where Bkool allows you to kinda rent a trainer while paying just for the software, so that’s still a bit different).

As you might expect from the overall direction of the company, they’re definitely working to position themselves more directly as a software services company – which is why you can also utilize their paid subscription software to control other FE-C compatible trainers, such as those from Tacx and Elite.  So while the FE-C control on their existing trainers probably doesn’t help them from a software services standpoint, it does help them stay more competitive from a hardware standpoint.

The Bkool pricing for the ‘Smart Pro’ trainer (that’s the resistance controlled one) is 549€/$699/£449.  That does start to make things a bit tricky compared to cheaper FE-C options for the Tacx Bushido Smart and the Elite lower-end trainers that have FE-C at the 390€/ pricing. 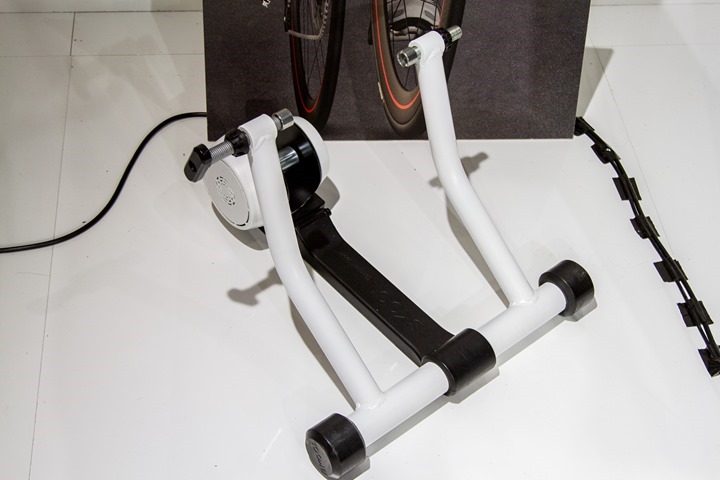 In addition to their upper end line, they’ve also introduced a new budget trainer at 199€/$239/£164.  This new magnetic trainer is not electronically controlled, nor does it broadcast natively anything on ANT+ or BLE.  However, they do have power curves available for it, which means that with the use of a simple ANT+/BLE speed sensor you’ll get wattage information displayed on compatible apps.

So think of this as the regular non-smart trainer that you used to have (or perhaps have had) in the past, just made by Bkool instead.

That power curve is included in the Bkool training simulator software, along with power curves for a number of other trainers by other companies (again, the focus on catering to any trainer out there and making money on the subscription service). 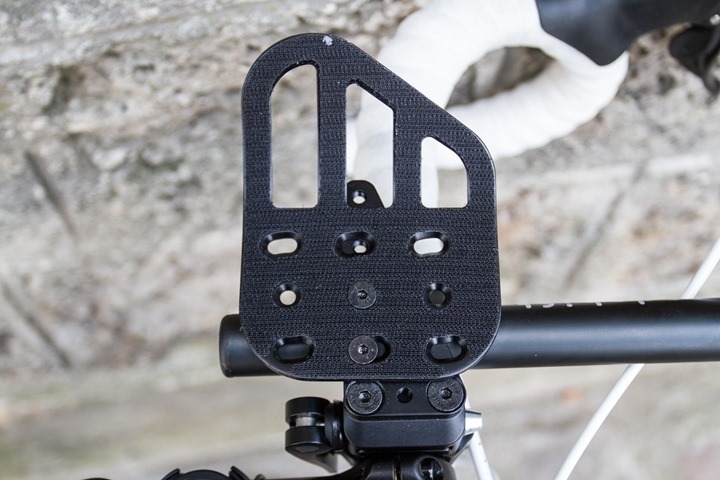 Finally, they’ve made a number of updates to their app recently.  I’ll briefly call a few of the most recent ones out.  First is the new Velodrome competitions.  These take the previous Velodrome modes and add an online competitive aspect to it where you can compete in different events with other players and teams.

Further, you can actually ‘watch’ an event – both as a spectator and then as a standby team member.  If standing by for your event, you’ll be on a virtual trainer in the middle doing a warm-up. 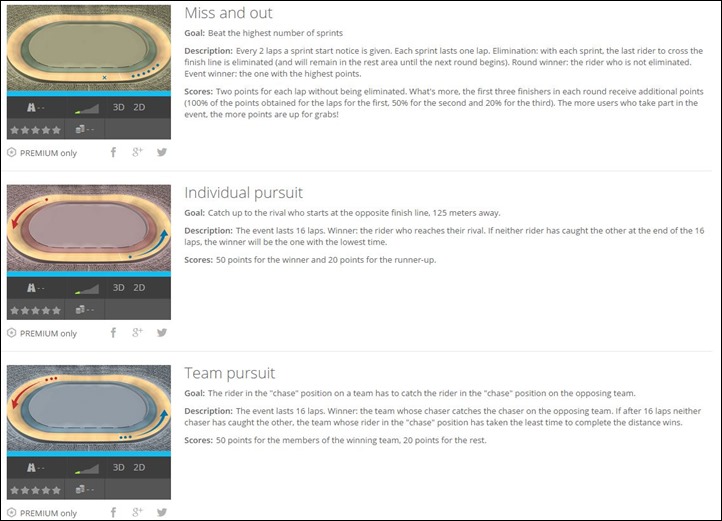 The Velodrome competitions come in three modes, which you can see above: Individual Pursuit, Team Pursuit, and ‘Miss and out’.

It was actually surprisingly impressive watching a few of these events happening in real-time today at the show from some random corner of the Internet (the people were elsewhere).  First, because of the serious wattages some folks were putting out (saw bursts above 1,000w), but also because the players were seemingly quite into it.  You can even chat/taunt messages as well to others. 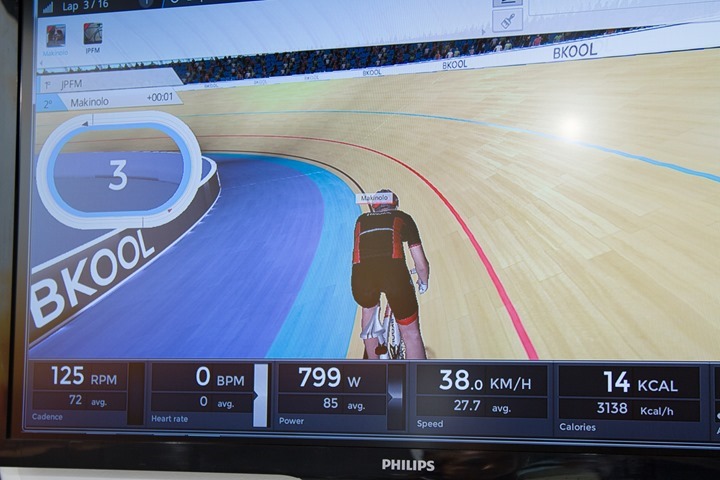 Next up they’ve started to refine their online rewards ‘currency’/points concept.  For a while now users have been earning points for various tasks and competitions.  But you couldn’t actually do anything with the points.  Now though, you can start to redeem those points for things like customized cycling clothing (digital, not for real life) within the application.  At different levels you’ll be able to do everything from just change the color and add text, all the way up to full-on logo uploading. 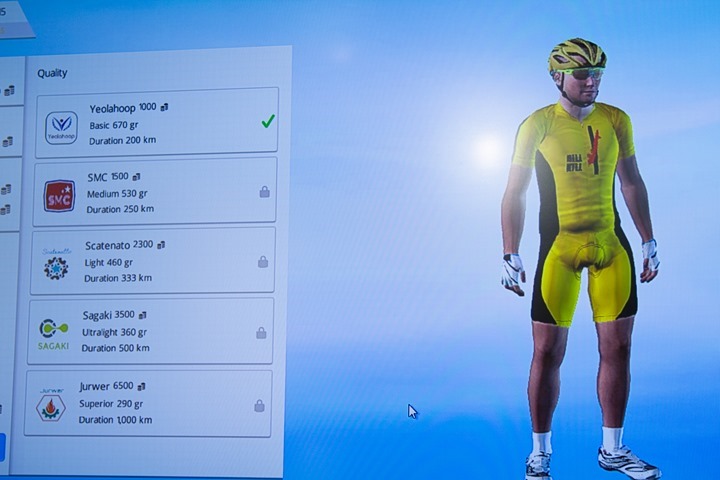 Interestingly, the clothing ‘wears out’ like real clothing and eventually starts to look tattered and with holes.  Though, they must have bought some bad digital fabric if it’s only lasting a few hundred kilometers.  Of further note is that the ‘higher end’ digital fabrics are lighter and more aerodynamic, and in turn the application actually gives you a very slight edge over crappier fabrics – within competitions.

Finally, as alluded to earlier but just to call it out here – the Bkool Simulator software now supports a number of power-curve trainers (i.e. those that aren’t electronically controlled), the list as of today is below – but note that they plan to constantly expand it:

Remember that this list above is in addition to 3rd party FE-C trainers (like the Tacx and Elite ones), as well as native support for the Wahoo KICKR.

Note that all of the newly talked about features are implemented today for the Bkool simulator software (just update it).  However somewhat interestingly the newest features will only be available initially for those with actual Bkool trainers.  So if you subscribed to the app but are using (for example), a KICKR, you won’t get the new fancy aero jerseys or the Velodrome games.  Over time though as they introduce other new features, the previous generation of new features will become available for all.  Sorta like rolling upgrades.  Just something to be aware of.

With that, thanks for reading!  If you’re looking to burn a bit of time, here’s all my Eurobike 2015 posts!