If you want to choose a speaker and have always preferred UE devices, then you might wish to consider the UE MEGABOOM Wireless Mobile Bluetooth Speaker, which is not only the price and superb audio quality, but also the fact many of the reviews we have read seems to find this model a perfect companion for the Echo Dot.

The UE MEGABOOM speaker with its 360-degree sound with deep bass, which is said to be freakishly amazing. Its waterproof, and so not an issue if you take it into the bath with you, or shower, and with it weighing just 1.93 pounds is easily portable as well. 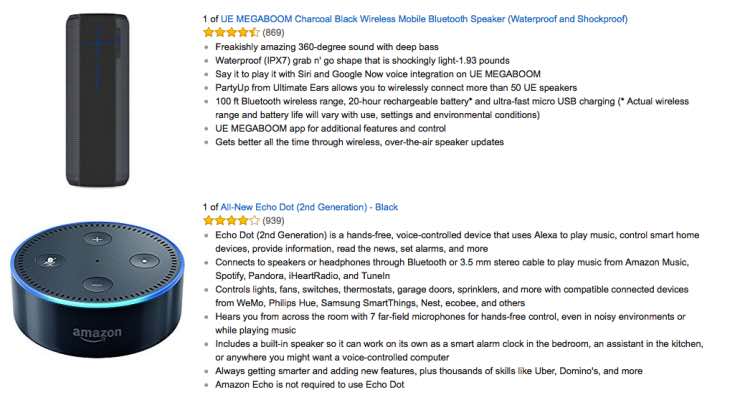 You can also make use if Say it to play it via Google Now and Siri, although you also have the option to pay that bit extra for Echo Dot 2nd-generation to get even more from the speaker, and so you are then able to take advantage of Alexa to control things such as music, and smart devices in your home. Most people love the fact you are able to turn the volume up high and still have no distortion. Ok, so it might be expensive, but it will be worth it – well that’s what another happy owner said.

As some people feel that the Aiwa Exos-9 is a better choice, although let’s face it, it’s far more expensive. If you are looking for something with a smaller price tag, then may we suggest the UE Boom 2 instead, which cost $170, although may cost as little as $100 later this month.