There is a new series of mini-ITX graphics cards by MSI which based on NVIDIA’s Pascal GPU architecture. It will offer plenty of power in a small package. The Aero ITX cards, as they are called, feature all the Pascal cards up to the NVIDIA GeForce GTX 1070, and are just the latest evidence than you don’t need a hulking full-tower chassis to build a high-performance system.

The GeForce GTX 1070 Aero ITX 8G OC is the longest of the Aero ITXcards, which measures in at 184mm long. On the other hand, the lower power cards like the GeForce GTX 1050 Ti Aero ITX 4G OC come in at just 155mm at their maximum length.

In keeping with the monochromatic design on MSI’s existing Aero cards, all the Aero ITX models feature a black and white cooling shroud that will blend in neatly with most custom builds.

MSI already offers mini-ITX versions of its GeForce GTX 1060, 1050 Ti, and 1050-based cards, but the new Aero ITX variants appear to feature more robust coolers over the existing designs. This includes semi-passive Torx fans that feature a mix of regular and dispersion fan blades for higher static pressure and airflow, and a dense aluminum heatsink with 8mm copper heatpipes. 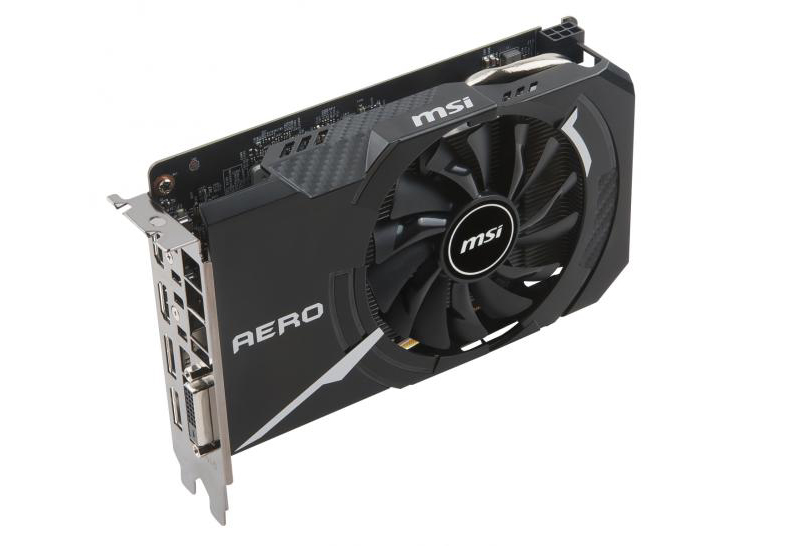 However, we should point out that the GeForce GTX 1050 Ti and 1050 Aero ITX cards are actually lacking the semi-passive Zero Frozr technology, so you won’t have the fans go idle when temperatures fall below 60°C.

There are both OC and non-OC models available, but the clock speeds appear to match that on the existing small form factor cards for the aforementioned models.

The OC models sport just a modest overclock over their reference specifications. For instance, the GeForce GTX 1070 Aero ITX 8G OC has a base clock of 1,531 MHz and boost clock of 1,721MHz, a small bump over the 1,506MHz and 1,683MHz respectively on the Founders Edition card.

We’ve been told that the cards will be available in early March, and will update when there’s news on local pricing.