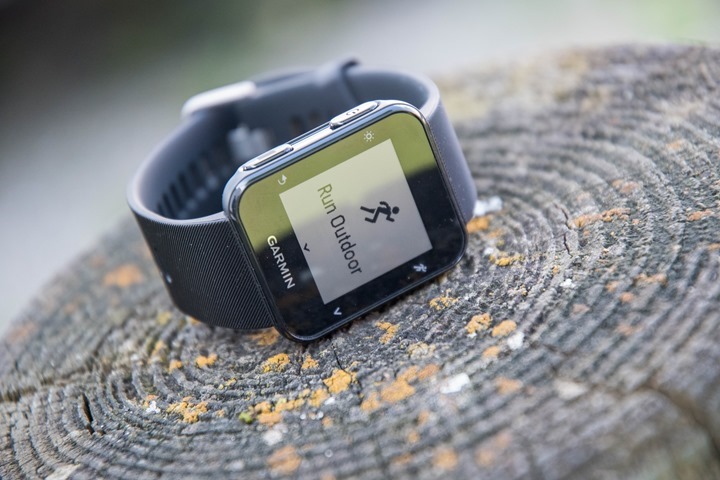 A day or 13 ago, Garmin announced their new Forerunner 35 (FR35) GPS.  But with Eurobike in full swing, I put it on the back burner a bit until the dust settled.  Now that things have cleared out a bit, I figured I’d spend a few minutes to run through what’s new about Garmin’s 8th wearable launched this year.  I’ll outline the nuances of the changes as well as how it stacks up against competitors.  Let’s get rolling! 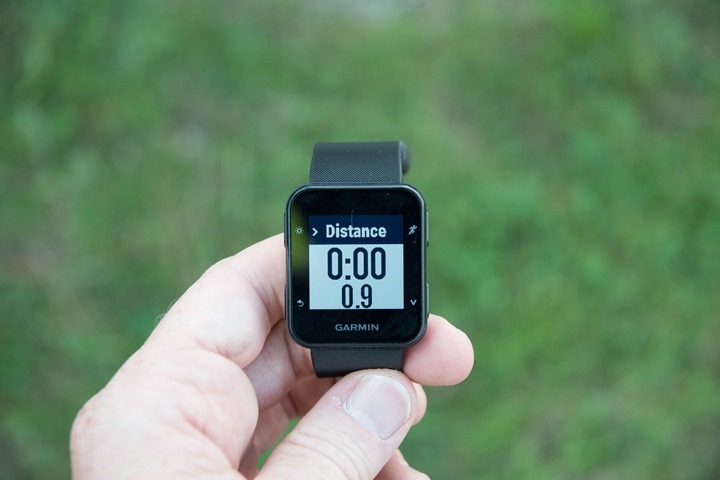 This is Garmin’s 4th edition of their budget GPS watch lineup, which has been refreshed each year.  It started first with the FR10 a bit over four years ago.  Then the FR15 added ANT+ HR compatibility and activity tracking.  That followed last year with the FR25 adding Bluetooth Smart for wireless phone syncing.  All of which brings us to now and the FR35.

So what’s new about it?  Well, here’s the simplest differences:

Now, the two biggies there would obviously be the optical HR sensor and the price jump.  Previously Garmin’s budget lineup has floated in the $129-$139 price bucket, with the option of adding an external HR strap bringing the price up to about $169USD.  This time around though they went for broke with a $199 price point.  The apparent idea there to compete with…well…I’m not sure.  Maybe Fitbit?  More on that in a moment.

So, that most obvious change is indeed the optical HR sensor.  That uses Garmin’s Elevate optical HR sensor, but it appears the slightly newer version of it seen in the FR735XT and the Chronos units that is a bit slimmer than in the past and reduces the ‘bump’ a bit compared to other Garmin wearables. 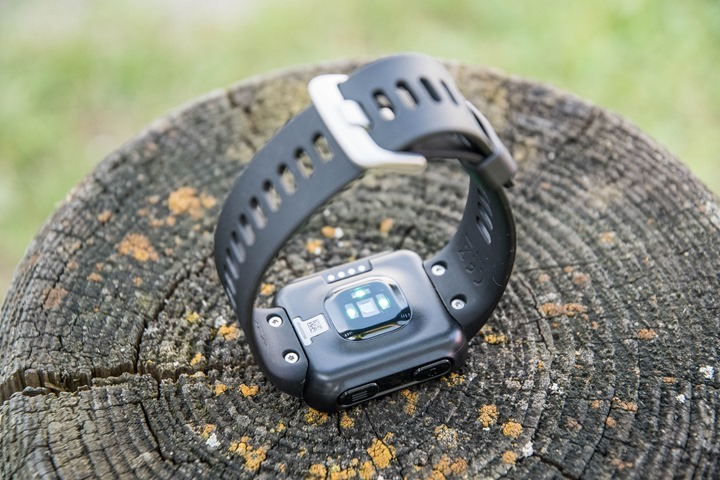 That same optical HR sensor will give you 24×7 HR readings that are recorded to the device and then uploaded to Garmin Connect via your mobile phone (or USB if you prefer to your desktop computer).  Those HR readings are recorded at a lower rate than those during workouts, which are every second in workout mode.  Plus, Garmin does allow you to re-broadcast your optical HR values via ANT+ to other devices (such as an Edge cycling device or trainer apps like Zwift and TrainerRoad).

On the features-side you’ll see a number of tweaks here in terms of additional capabilities over previous models.  For example, the ability to have specific sport profiles means that if you want to go for a ride or use it in the gym, then they don’t just all show up as runs.  Previously, everything was a run.  Even if it looked like a duck or a swan, it was still called a run. 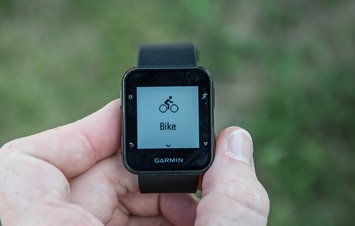 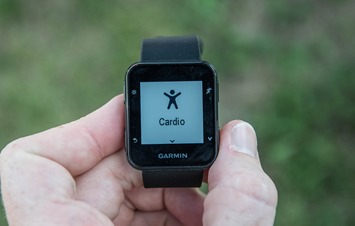 From a sensor standpoint, it supports both the ANT+ heart rate strap and ANT+ footpod.  For those curious, it did not appear to pair to any of my ANT+ cycling sensors when I tried.  Update: The manual says I should be able to do this, so not sure why it didn’t detect any of the 98 sensors on my bike. 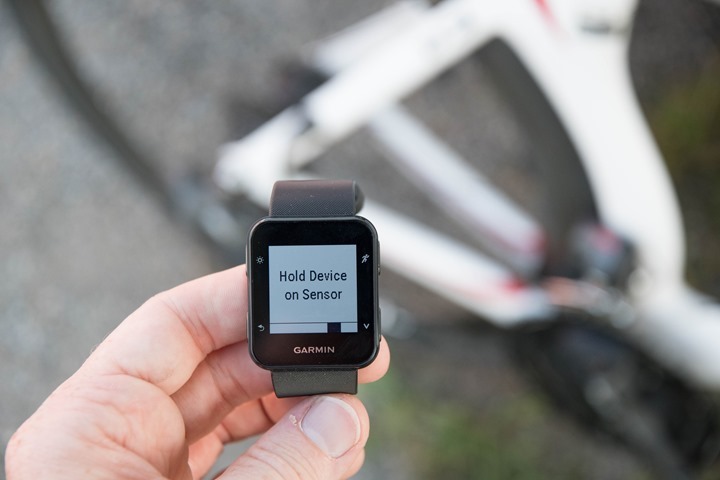 In addition to those sport modes, you’ve also got MoveIQ, which will recognize sports automatically if you forget to turn on the GPS.  It does this behind the scenes, and then the activities show up on Garmin Connect Mobile.  It won’t turn on the GPS, but rather just uses the accelerometer for them to give you the basic gist of things.

When it comes to data fields, you’ve got two customizable pages.  Each page has three metrics on it (not one, nor two…just three).  Those metrics you can choose from specifically being: Time, Distance, Pace, Calories, Heart Rate, HR Zone, Lap Time, Lap Distance, Lap Pace, Avg. Pace, and Cadence.

(Note: This FAQ page is at odds with the current state of the product, which states four data pages, and that you can choose less than three metrics.  I’ll circle up with Garmin and see which one is right.) 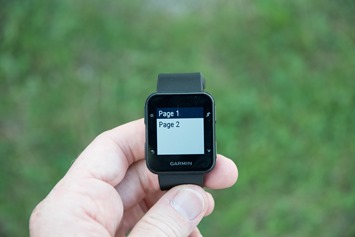 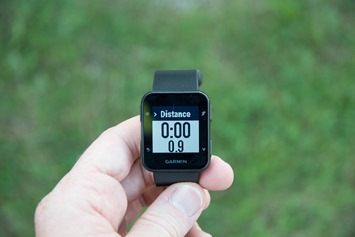 There’s also an interval mode, which is actually more customizable than I expected.  You can tweak things like rest/work portions and quantities, as well as whether or not to do a warm-up/cool-down. 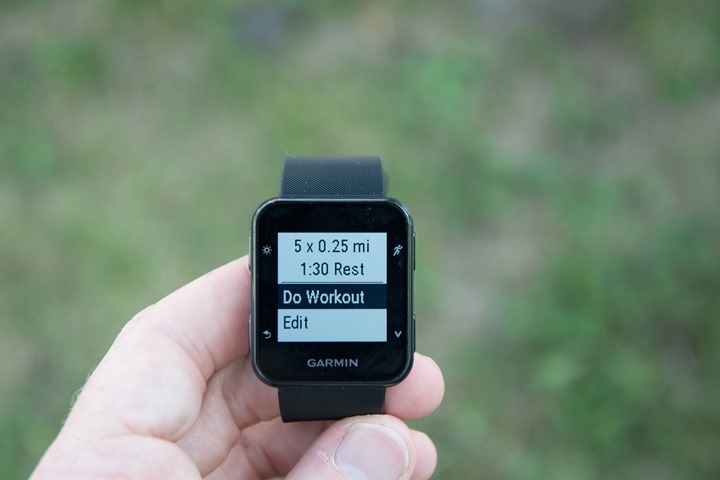 Said differently: They implemented it properly (most budget GPS watches will skimp on the interval function, and make it super-dumbed down and unusable, so this is a nice surprise): 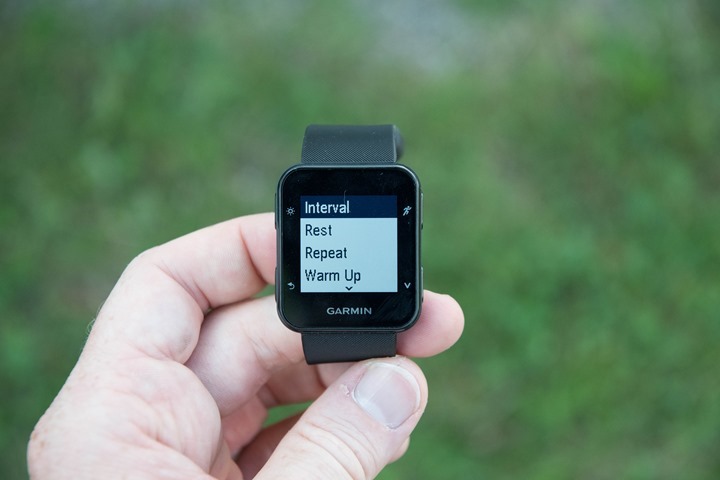 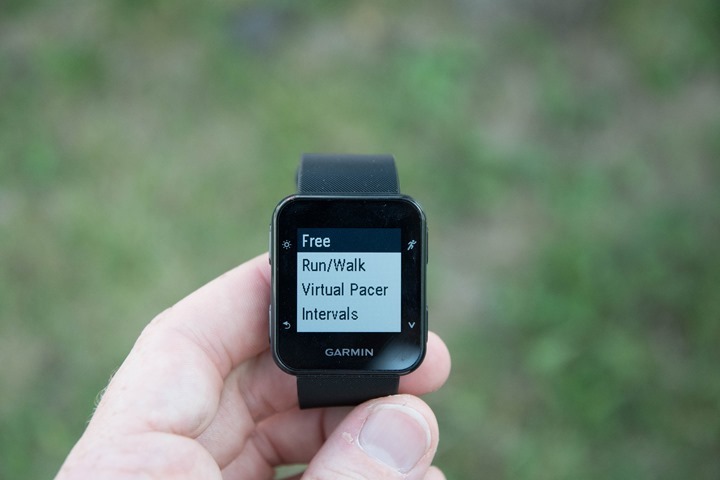 You’ve got the option of both a digital and analog watch face.  Though honestly, the analog watch face looks sad.  If for no other reason than the battery icon looks like it got lost during a hike across the screen and just sat down and gave up at some point. 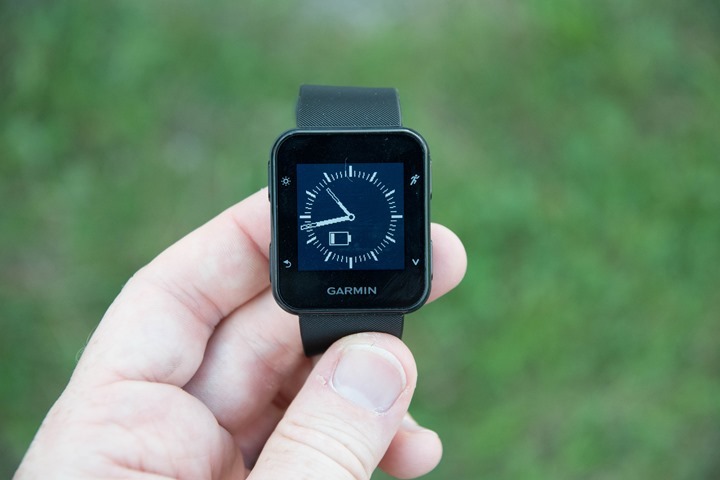 Beyond that, the majority of the features are what we’ve seen in the past FR10/15/25 lineup.  So you’ve got your activity tracking and Bluetooth Smart sync (as of the FR25), as well as basic customization of settings like pace vs speed, languages, and alerts.  Oh, there’s even a do-not-disturb mode on the unit as well that you can set. 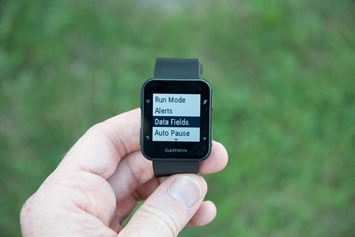 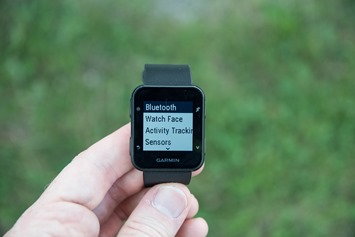 If you’re looking for the full home tour though, you can watch the below video.  I walk through virtually every menu there is, giving you the most voyeuristic view of the FR35 you can get:

Finally, as you probably noticed by now, the screen definitely feels crisper and sharper than many other watches in this category.  So if you’re looking for something that’s going to be easier to read – this may be one to consider.

What’s in the box: 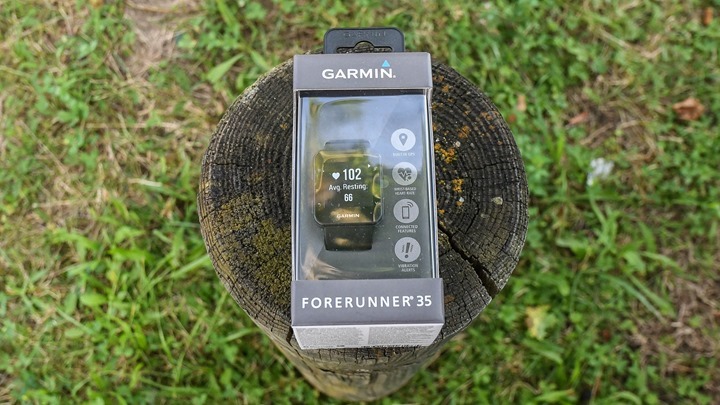 What’s that?  You wanna know what’s in the box?  No problem – I did an impromptu unboxing on a pole video while at Eurobike.  No, I wasn’t pole-dancing (nobody wants to see that), but rather just managed to unbox the whole thing outside the DCR Eurobike RV sitting on a random wooden post.  It was either that or the table inside.  And that was covered in gadgetry already.  Go forth and enjoy: 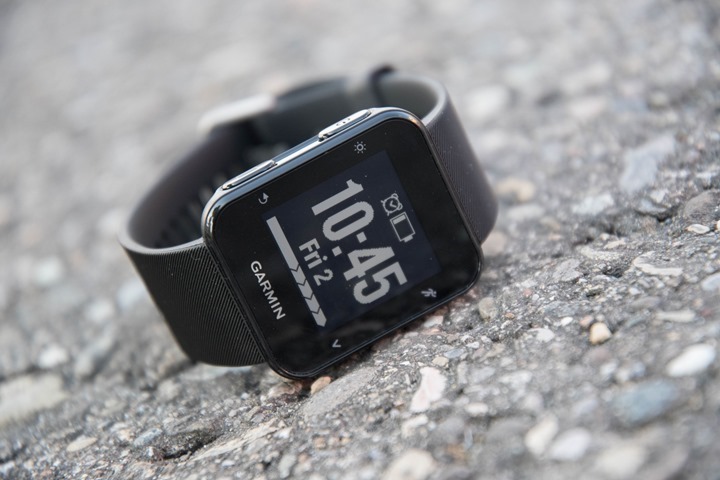 So the FR35 is an interesting duck when it comes to price.  On one hand it’s a significant jump in price from the usual $129-$139 range, which is odd to me.  Overpriced even.

But on the other hand, it’s including optical HR.  So at that price-point, they’re competing with the Fitbit Blaze at $199, but the Blaze lacks GPS.  And in a pure features shoot-out, the FR35 has more features than the Fitbit Blaze (except the handful of structured gym workouts from Fitbit on the unit).  They’re also sorta-but-not-really competing against Apple with the updated Series 1 units at $269USD (announced as part of the Apple Watch Series 2 launch).  But realistically that’s just a different audience.  Plus, if you’re gonna spend $269, you might as well just get the Garmin Vivoactive HR, which has boatloads more features.  I guess I think this watch would have done a lot better at $169 than $199, which sounds obvious, but it may be tricky to compete later this fall at $199 with this.

And if Garmin keeps the FR25 in the line-up still, then in many ways they’ve just added a new price tier in between their lower end offering and the Vivoactive HR in the $250 ballpark.  Some might say that Garmin’s product line is getting too confusing and hard to navigate (they’d be right, and major big box retailers say the same thing), but on the flip side – Garmin’s earnings and wearables placement in terms of units sold seem to show it’s working.

Ignoring the price though, it’s a really nice feature line-up from Garmin in terms of small but useful product additions to their budget GPS watch.  It nicely targets the all around runner that just wants a simple and straightforward GPS watch that can still act as a daily activity tracker inclusive of continuous HR.

Side note: You can now pre-order the FR35 from either Clever Training or Amazon.  Both are slated for delivery later this month in seemingly all the colors of the rainbow.  Ordering through either company helps support the site here!