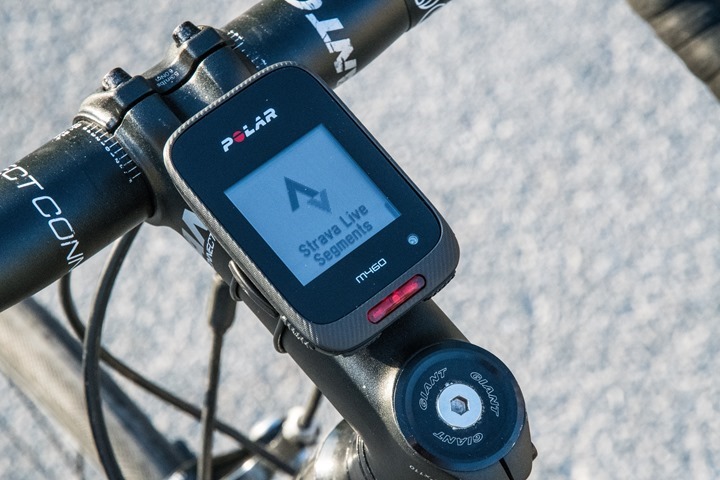 Today is shaping up to be a rather busy day for announcements!  Polar joined the Wednesday new products club with its new M460 bike GPS.  This bike computer builds on the M450 unit they announced almost two years ago. Both units are targeted at the mid-range market in terms of functionality, yet both actually have very reasonable prices ($159/$179).

The M460 aims to incrementally improve upon the M450 with some modest software enhancements, along with a new all-black look.  These updates include Strava Live Segment functionality and increased power meter support/metrics.

Polar dropped me off a loaner unit to toy with earlier in the week, which has enabled me to poke at some functions – but not quite everything.  That’s because pieces like Strava Live Segments won’t be enabled until April 19th. As such, this post is a very preliminary look at things.  While technically hands-on, I’ve only ridden a little with it.  I’ll dive into more detail next week once the Strava Live Segment piece lights up.  This is not an in-depth review, or a review in any way really.

With that, let’s talk about the differences.

As you may remember last week, Polar announced their M430 successor to the M400.  This was a modest hardware tweak to their existing and popular running watch.  It added an optical heart rate sensor to the back and a few new features.  It essentially kept them competitive in that market.  With the M460 bike computer however, they’ve taken a different path despite the similarities in target markets.

Specifically that the M460 contains no major additional/new hardware, but rather just three software enhancements.  Sure, it’s got a new exterior case that’s now black instead of white – but it’s the same guts.  They did make a minor tweak in the buttons however to make them feel a bit better. 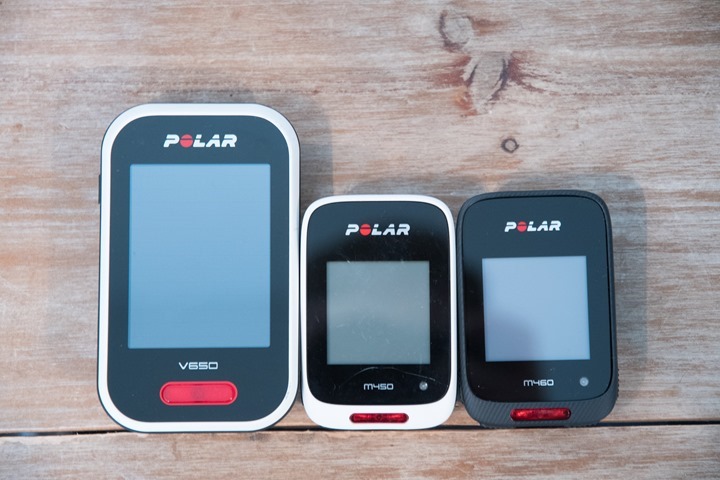 Instead, the focus was on delivering the following three and a half features:

– Strava Live Segments: Allows you to compete against segment leaders on the unit itself
– Power Meter Update: Added Training Peaks Normalized Power (NP), Intensity Factor (IF), and Training Stress Score (TSS), improved power meter support
– Smartphone notifications: You can now get smartphone notifications on the unit itself mid-ride
– GPS gradient: You can now see gradient (aka incline) using the unit without a speed sensor

Now, there are some undercurrents to the power meter support that’s worthwhile digging into.  Specifically that the company is going to more broadly support 3rd party power meters from a left/right standpoint.  Right now they support their advanced metrics (like force direction) on the M450 but only for their power meter.  Going forward they’ll support it for other units such as the PowerTap P1, ROTOR 2INPower, and other power meters that support the data streams. 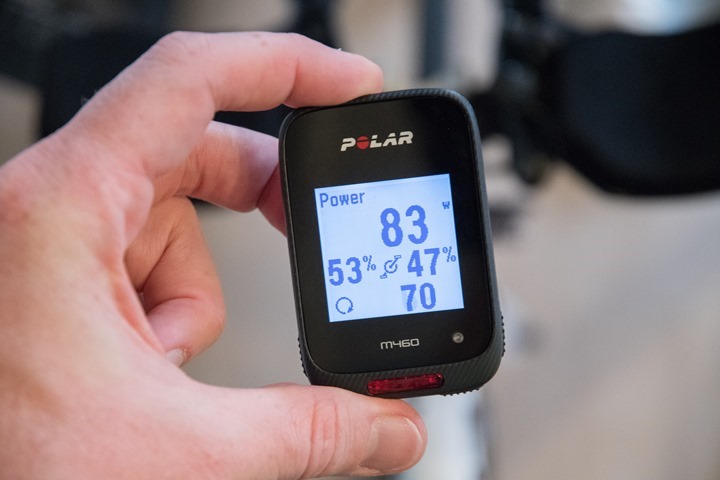 The challenge Polar has here is that there is no standard for these extended data types. Sure there are basics like left/right power over Bluetooth Smart, but when it comes to directional force and such, each company is doing it entirely differently (like, really differently).  So it’s likely to be a long road.

For example, in trying it out last night (it’s still beta of course) with the ROTOR 2INPower, it kinda worked for the advanced metrics.  It showed one side, but not the other.  But did properly display left/right balance on other screens.  Polar responded this morning that they’re aware of the issue and are working to resolve it. 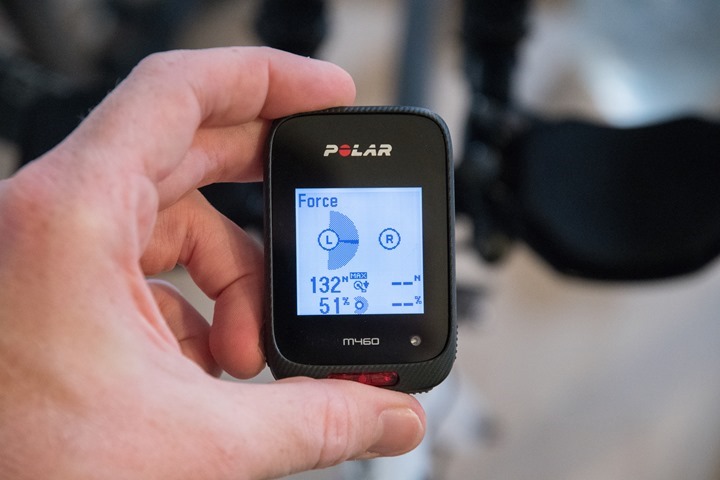 Still, it’s going to continue to be a long road ahead.  Nearly every firmware release these days (head unit or power meter focused on BLE) still seems to break someone in the equation – with someone being the consumer.  Until we go a period of 12-18 months without a single incident, it’s going to be incredibly hard to recommend consumers put themselves in the position of only being able to use BLE for a power meter.  Even things that would work for months often stop one day, as many Polar power meter users can attest to.

I know both Polar and power meter companies have been working closely together in recent months to try and resolve these issues, but I still want to see long term proof of sustainability. 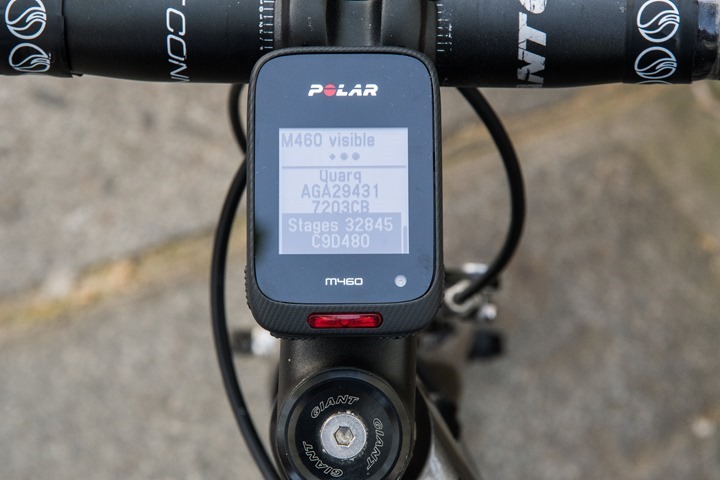 Along the power meter line, we’ve got the addition of the TSS/NP/IF metrics from TrainingPeaks.  These are pretty common on other competitive units, so it’s good to see them here as well.

Finally, we’ve got the biggie – which is Strava Live Segments.  This falls in line with most other industry players in adding this feature.  We’ve seen Garmin, Wahoo, Lezyne, Mio, and probably a few others I’m forgetting all add this into their bike computers.

Like those others, you’ll need a Strava Premium account in order to get the functionality to work, though Polar/Strava will give you a free 60-day trial to see if you like it.  Once that’s all connected behind the scenes you’ll see your favorite Strava Segments within Polar Flow (the ones that are starred).  Since it’s not live yet on production, they shot me over a few screenshots to explain: 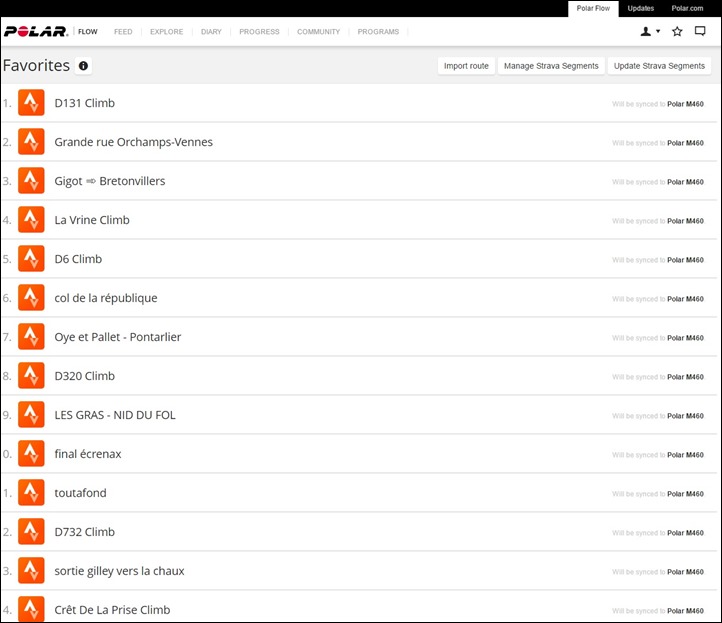 The above will be sync’d to your M460.  You can also click on any given segment to get more information about it, all staying within Polar Flow.  You can see below the overall fastest men/women, as well as your best time.  Plus some general stats about the segment. 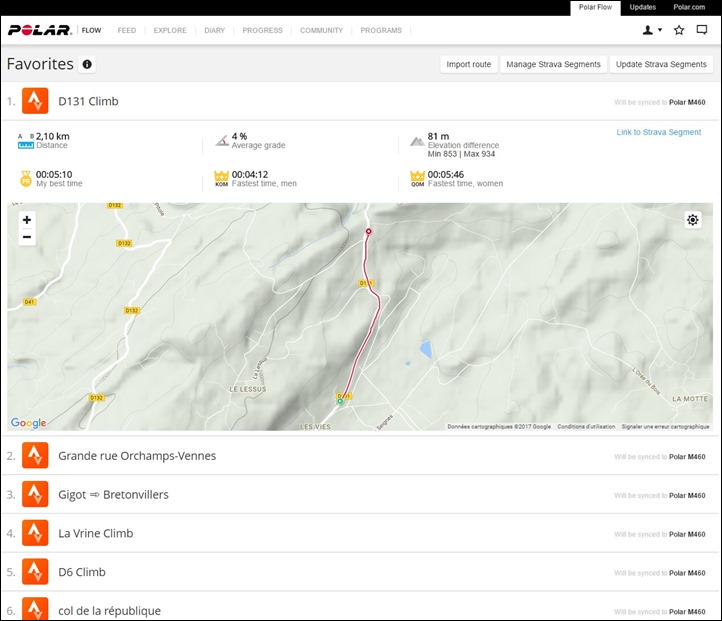 That’s kinda cool, given that nobody else does that on their platforms.  Everyone else requires you to be totally on Strava and just works their magic behind the scenes.

While out riding it’ll show you nearby segments, such as these two segments that are .26KM and 1.77KM away.  All of these come from the list of starred segments. 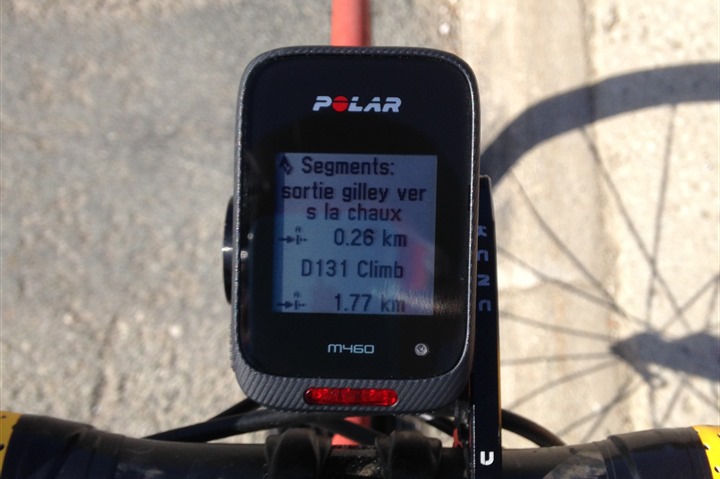 Once you approach a segment you’ll get a countdown distance to where it begins.  For example below you see 127m remaining till the segment starts.  Again, since I couldn’t enable this on my unit yet one of the Polar guys went out and did some segment hunting with a camera: 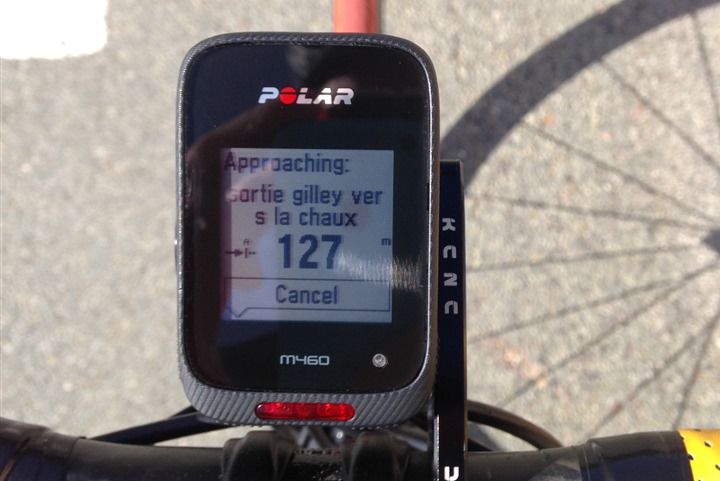 Then once you are within the Segment you’ll see the status of the segment displayed, including your status against your PR, the KOM, or the QOM.

For the most part, this seems like a pretty simple implementation of Segments, pretty straightforward.  Still, I’ll be interested to give it a whirl myself next week and see if there are any nuances (good or bad) that differentiate it from the competitors.  In general, I think Wahoo’s implementation is the best, with Garmin not too far behind.  Each company makes their own slight tweaks in terms of how they do it.

Beyond these noted features, there isn’t anything else new on the platform.  It’s a pretty cut and dry situation.  The existing M450 will retail at $159USD/EUR, while the new M460 will come in at $179USD/EUR.  I think it’s fair to say that if you care about Strava, you’re likely willing to pay another 20 bucks. 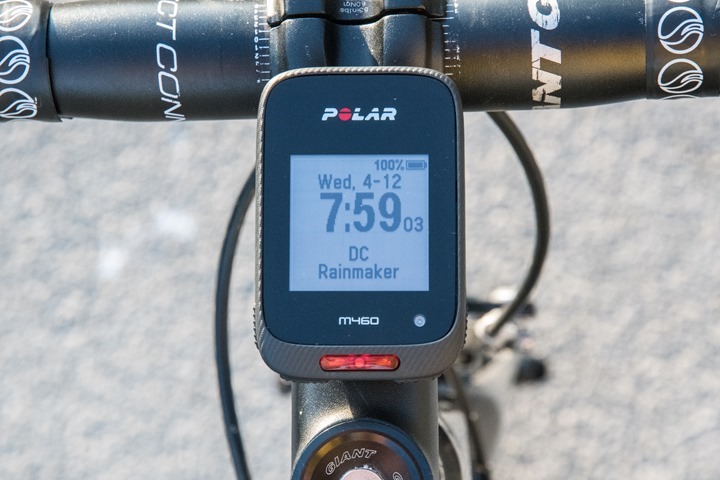 Now it’s pretty obvious this is a fairly minor and incremental update.  Most companies (ok, actually, all companies in the market) have given these same features to existing units without purchase of a new unit.  So it’s a bit surprising Polar isn’t doing the same.

For example, the Wahoo ELEMNT got Strava Live segments after release; so did most of the Garmin Edge series made within 2 years of the initial announcement eons ago.  As did Mio’s units (heck, they were even older than Garmin).

And in many ways the same is true of the power meter side.  All the other bike computers in the market already support these metrics (or similar ones), and all of them have mostly complete compatibility for advanced power data.  There’s some nuances between units, especially when it comes to how you match up certain data fields on the ANT+ side to that of the Bluetooth Smart side. But we’re roughly in the same ballpark. 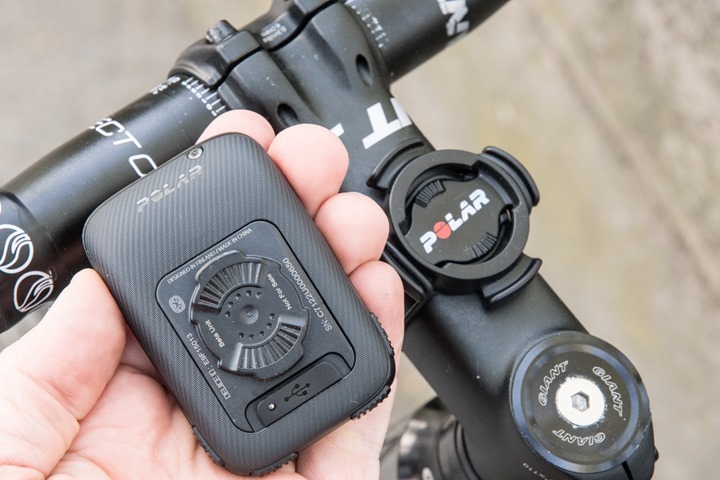 Which gets us to the same sticking point it was with the M450 two years ago: It lacks ANT+.  While the cycling power meter world is largely now dual ANT+/Bluetooth Smart, that doesn’t help the hundreds of thousands of ANT+ only power meters out there.  With power meters not being a cheap item, there’s little reason for folks to convert to Polar for these additions.  As I noted in the Polar M450 post at the time, the room of journalists were actually kinda angry at the lack of ANT+ support.  It was moderately surprising.

But they were right.  While the M450 got off to a rocky start with delays, the core reason it simply hasn’t done well in the larger bike computer market is due to lack of ANT+. Period.  If they were to add that in, it’d wipe Garmin and Wahoo on the floor…overnight.  A unit that’s $80-$120 cheaper that does almost everything they do (if not more in some cases)?  Seems like a no-brainer, no matter how proud one might be of protocol party politics.

The overall shift in the entire industry is towards dual protocol head units: Wahoo’s ELEMNT, Stage’s Dash, Lezyne’s units, and heck – even Garmin’s FR935 and Fenix5 as well.  It’s not because anyone sees one protocol as the winner, it’s because they recognize that consumer choice and flexibility is what’s going to win them sales.

In any event – if you’re looking at the Polar lineup and don’t have a power meter, without question it’s an awesome buy.  It always has been.  With the power meter front, it’s going to be much more tricky and I’d recommend waiting to see how things shake out.

Update: You can pre-order the Polar M460 from Clever Training today, expected delivery later this month.  Plus, if you use DCR Coupon code DCR10BTF, you’ll save 10% and also get free US shipping.  Plus, it helps support the site.  Enjoy!