True wireless earbuds are no longer a niche sub-category. While the term “cord cutting” is typically used when people abandon traditional cable TV, the term could definitely apply to headphones in the current market as well. All wires are disappearing in the Bluetooth headphone space faster than ever, and it seems everyone wants in on the action.

JLab’s Epic Air are the latest to add to the growing pile. Designed as a pair of stylish sports buds, the Epic Air aim to hook people in (literally) and keep the music playing longer than many others on the market. We checked them out to see how they stand up to the expanding field.

Out of the box

The Epic Air come mounted behind a plastic enclosure, perched above the rest of the packaging that includes eight sets of ear tips of varying size, with a few flange ones aimed at tighter passive noise isolation. Of the range inside, there are no Comply Foam tips included.

The oversized, pill-shaped charging case includes a short and flat micro-USB cable that wraps around it. A quick start guide with illustrations rounds out a pretty basic unboxing experience.

JLab makes it obvious the Epic Air were meant for active users who want loud volume and durability in the gym or when out exercising. The IP55 rating for water and dust-resistance reflects that, though they aren’t robust enough to be used for waterborne activities. The primary focus is on withstanding sweat, which is why JLab asks you to wipe both earpieces dry before placing them back in the charging case after use, or risk voiding your warranty.

The earbuds themselves aren’t particularly flashy, but the style stands above many over-the-ear buds of this nature, and the build quality is good with a practical design. Key to that are the flexible ear hooks that keep the buds firmly in place, and JLab angled the 8mm drivers in such a way that the Epic Air effectively anchor to the inner ear. Admittedly, we actually had to follow the visual instructions in the quick start guide to learn how to put them on and take them off gracefully.

The hooks’ flexibility makes them easy to wrap them around each ear, but we did have to fiddle with the overall fit the first few times we tried them. Part of the reason is because the power button is on the inner side of the earpiece.

In cases where we needed to manually turn the Epic Air on — while still wearing them — we had to finagle our fingers in to push them. Triple-pressing the button turns on auto-pairing, so the Epic Air connect when removed from the case, negating the need to turn them on manually. 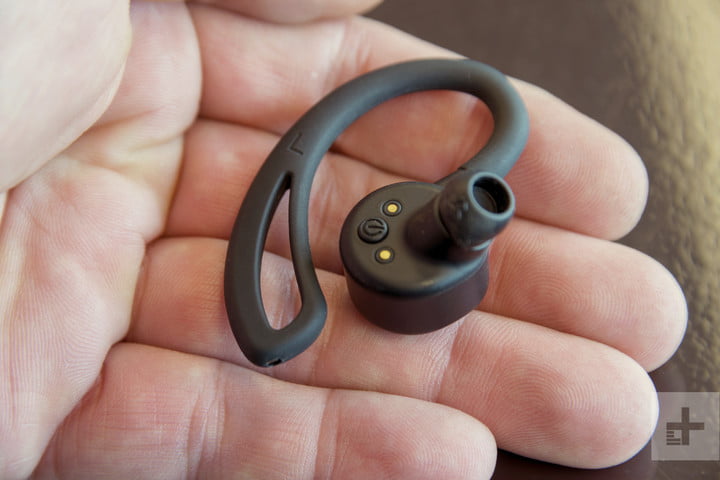 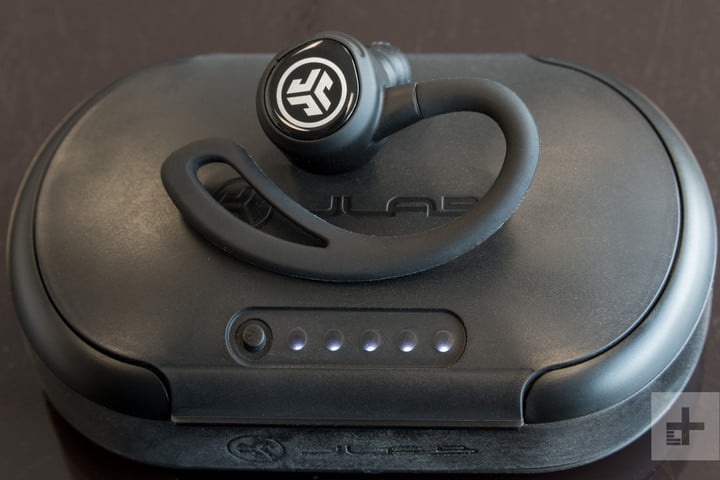 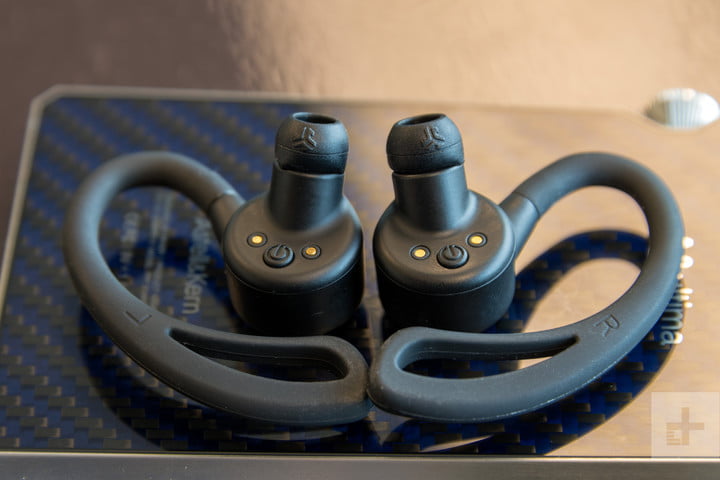 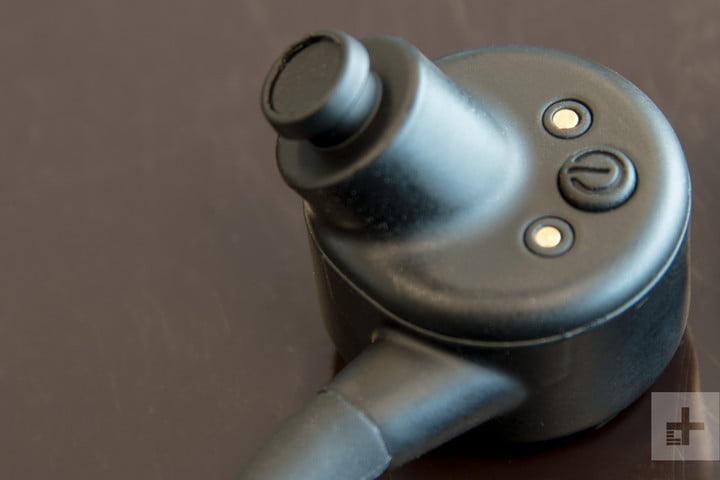 Rather than have one dedicated side always maintain the connection you can choose which side you want to be the master. We tried both, but ultimately settled on the left side because we often use pockets on our left. Once that initial connection was made to our phone, the primary earpiece then connected and synced to the other automatically.

The outer surfaces on each side feature touch-sensitive controls. On the left earbud, a single tap will play or pause (and answer or hang up calls), while a double-tap activates Siri or Google Assistant. Holding it for one second lowers the volume. On the right earbud, a single tap skips a track, and a double-tap goes back a track, while holding it raises the volume. The process takes a while to get used to, but the touch controls were responsive and worked well in our testing.

JLab engineered the 8mm drivers to punch through on the lows, not on balance with the mids and highs.

The buds charging case is massive compared to most competitors, and that’s to both accommodate the size of the earbuds themselves, but also for the larger battery inside. On their own, JLab claims the earbuds can muster six hours of battery life per charge, and that checked out in our testing (more on that below). Add an extra five charges courtesy of the case and you get up to 36 hours total – far better than many other true wireless earbuds can manage.

On top of that, JLab took the unusual step of making the case a portable charger for other devices, too. You can plug in your smartphone to charge in a pinch, which is a handy feature, though the size and weight makes the case better suited to a small bag than a pants or shirt pocket. Additionally, fewer devices use micro-USB, so you’ll need to tote around a Lightning or USB-C charging cable for phone charging. 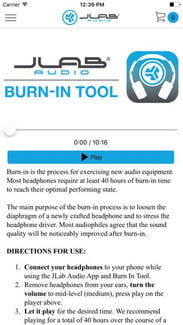 JLab offers a dedicated app for both iOS and Android to tune the Epic Air. It’s designed to “burn-in” the earbuds by playing white noise and other sounds in 10-minute increments each time. JLab suggested doing that for up to eight hours per day in the first week (to hit 40 hours total), which simply wasn’t possible for a few reasons.

First, there is no way to do it in the background, meaning you’ll have to stay on the app and turn off auto-lock on your phone to keep the screen from going to sleep. Second, the sheer amount of time required makes it hard to even hit two hours, much less eight in one week. And lastly, the app doesn’t reveal how much time has elapsed.

We get that burn-in helps loosen the diaphragm and push the drivers, but we can’t really understand why that process couldn’t just happen while listening to actual music. Improved audio quality is the end goal of the whole process, and JLab could’ve done a better job explaining that. We did notice a performance improvement after several hours of going through the burn-in process, but we believe simply listening to countless hours of music helped that along.

The Epic Air support both aptX and AAC Bluetooth codecs, making them capable of getting the ideal audio stream for both iOS and Android devices. Coupled with the power in the drivers, audio quality is agreeable to anyone looking for an audio boost out of the box.

By default, the lows pound through to a point that muddies the midrange and treble. For example, Ed Sheeran’s Shape of You sounded fine because of how the track’s bass thumped with depth throughout, whereas AC/DC’s Back in Black was less balanced because of the higher treble mixed on that track. The Black Panther movie soundtrack sounded punchy, thanks to a track list that benefitted from the bass response.

Not surprisingly, this somewhat skewed spectrum suits listeners who prefer hip hop and electronica as genres of choice. Given other true wireless earbuds have struggled in delivering good bass, the soundstage here could be ideal for listeners demanding it. In fairness, one of the main reasons the bass suffers with other models is because of the fit. Use the right ear tip and ensure proper placement in the ear, and improved bass generally comes out.

No matter what we were doing, the Epic Air were excellent at staying put. We rarely had to adjust the fit during playback, and never once felt concerned they might fall off. But the fit isn’t the only reason for better low-register response. It’s obvious that JLab engineered the drivers to purely punch through on the lows, not on balance with the mids and highs. 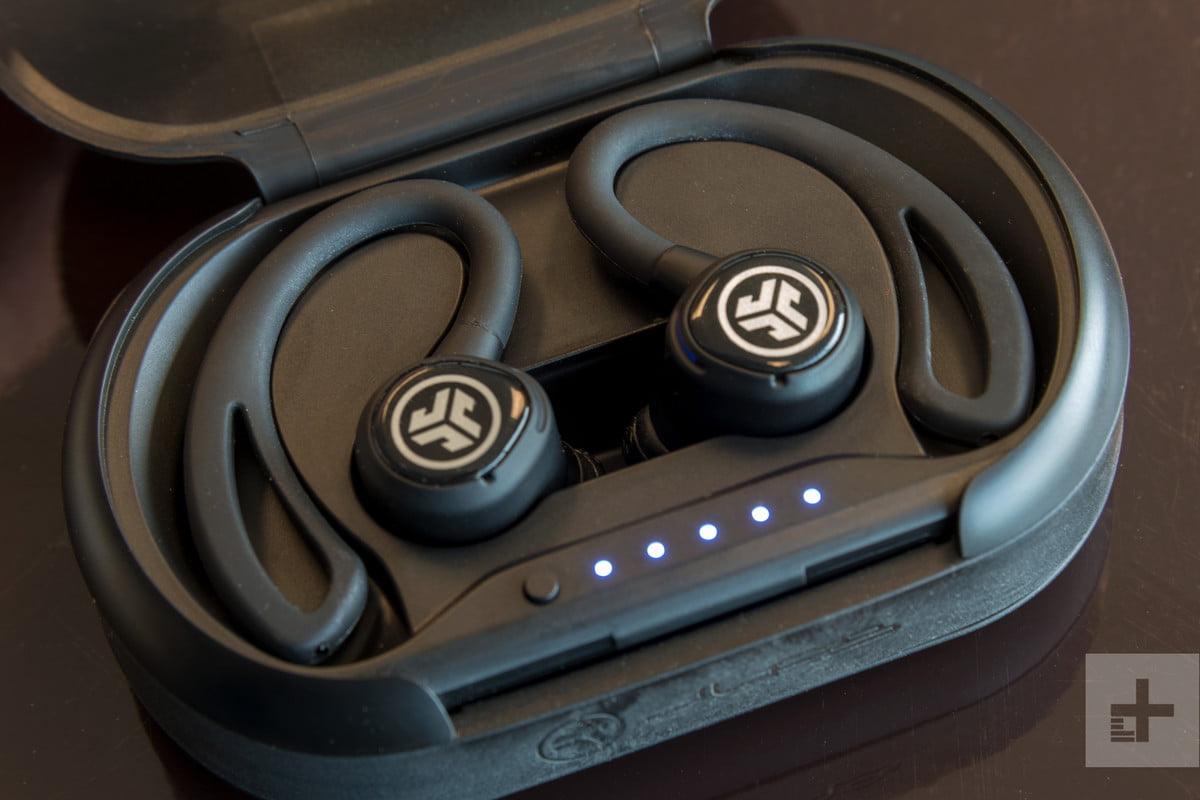 Unfortunately, as is common with many true wireless buds, there were instances of the signal itself falling off. It was odd in how it would randomly happen in close proximity, yet play perfectly fine 15 feet away from the phone. It wasn’t something we experienced constantly, but it was often enough to determine it a pattern. We were fine if we kept the phone close enough on the side we paired with, noticing the most disruptions when switching pants pockets to the opposite side.

We also experienced instances of shifting stereo image, where audio would veer left to right. It went that way because the left earpiece was paired with our phone, indicating that there could be some signal loss from one side to the other. This didn’t happen often, and it was usually a result of the phone’s placement causing a disruption, but it’s something we’d like to see eliminated at this price point.

Even at 50 percent volume, the Epic Air were already loud enough to wear in the gym for our ears. Even if you really like your music blaring, we can’t imagine going above 75 percent for a sustained period of time. That enabled the Epic Air to almost always hit the rated six-hour mark in testing.

In fact, with five extra charges, we didn’t have to recharge the system until well over a week later. The only problem is that the case’s size and weight makes it more challenging to be truly portable. Other cases, such as those for Apple’s AirPods or Jabra’s 65t, have a much smaller footprint, though they admittedly don’t offer as many recharges.

JLab offers a standard one-year warranty covering parts and labor for repair and replacement, but doesn’t necessarily include damage from sweat. There is a 30-day guarantee, with exchange or return from the point of purchase.

For any pair of true wireless earbuds, you want something dependable, and JLab’s Epic Air holds some merit in that regard. The build is sturdy, the fit is tight, the sound is loud, and the battery lasts. Gym rats and regular runners will appreciate that combination because it checks off the important boxes. These are best worn when active, since you won’t be holding your phone enough to trigger connectivity drops.

If you don’t count yourself among that crowd, though, you best look elsewhere because better audio quality and more reliable connection is available at competing price points, not to mention a smaller charging case.

Is there a better alternative?

Apple’s AirPods always gets a nod because, while not being the first, they’re the earbuds that helped bring the category out into the open, and moreover, they do so in a package that just works. They’re similarly priced, except the Epic Air is clearly built for more rugged endurance. The Jabra Elite Sport are among the best available, especially because of their reliability and three-year warranty, but you’ll have to pay around $220 to get them at time of publication. The newer Jabra Elite 65t can be had for $170 and are indeed “elite” for everything they offer, selected as our favorite in the genre at time of publication.

A similar product to the Epic Air, like the Rowkin Surge, can be had for $100, but they aren’t as consistent as the Epic Air. They may lack the ear hooks, but the Optoma NuForce BE Free8 offer a more balanced soundstage for the same price. The one key downside is there are no onboard volume controls, like the Epic Air has.

How long will it last?

The most critical part of the Epic Air’s longevity is durability. If you’re using these while active, it’s best to always clean them from time to time, making sure excess perspiration is gone. Since the warranty won’t really cover sweat-induced damage, that kind of TLC is a must to keep them fresh.

The other factor is the connectivity. True wireless earbuds aren’t perfect at maintaining the connection on both sides, but they’ve gotten much better. We were a little concerned at some of the inconsistency with this pair, but didn’t find it to be onerous enough to fear degradation over time.

Should you buy it?

Assuming you’re okay with the potential for connection cutouts and want the bass these deliver, then the Epic Air might be a good fit. They stay put and play loud tunes for a good hour or so longer than most others do. If you’re looking for higher fidelity and fewer connection woes, we suggest looking elsewhere.